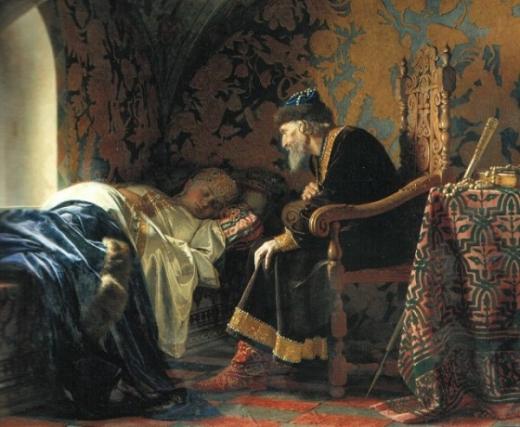 3 December 1564 Ivan the terrible left Moscow and moved to the Alexander settlement. Almost two decades of capital, cultural and political center of the state was the suburban residence of the king.

In early December 1564 Ivan the terrible began to behave very strangely: he visited the capital’s churches and monasteries, and she prayed fervently in them. In the prayers there was nothing strange, strange charges were: Royal family was preparing to move. To the great displeasure of the Church authorities, Ivan IV ordered to pick up and drive to the Kremlin’s most revered icons and other “Holiness”. On Sunday, December 3, Grozny, was present at the divine service in the Kremlin Dormition Cathedral. After the service he said goodbye to the Metropolitan members of the Boyar Duma, clerics, nobles and the capital’s guests. On the square before the Kremlin were already hundreds of loaded wagons under the protection of several hundred armed nobles. The Royal family left the capital, taking with him the entire Moscow “Holiness” and the whole state Treasury. The Church Treasury and the Treasury became some sort of collateral in the hands of the terrible. The army, who accompanied the Emperor was fully armed and ready for war, nobles were accompanied by military slaves (“people”). Royal departure was unusual. “Close people”that accompanied the terrible, was ordered to take the family. Remaining in Moscow boyars and the clergy were in complete ignorance of the intentions of the king and in perplexity and distress were such gosudarstva great unusual rise and worthwhile his procession did not know Kuts base”. Royal train wandered around Moscow in a few weeks, until they reached the fortified settlement of Alexander. Hence, in early January, the king was informed of the Metropolitan and the Duma that “from the great pity of the heart, he left his country and decided to settle there, where his sovereign, God will guide”. It can be assumed, in the days of “wandering” king worked Testament and quite frankly explained the reasons for departure from Moscow. “And what many of my iniquities of God’s wrath upon me laid, ” wrote Ivan, banished am from the boyars, samovolstva for their sake, from his domain and skithouse by country, maybe God will not leave”.

Known that in the Alexander settlement Ivan IV organized his “monastic brotherhood. Ivan IV wrote to oprichnina corps in the Alexander settlement Charter of the monastery, he was the Abbot of this monastic community, Prince of Athanasius Vyazemsky was appointed steward, Malyuta Skuratov Church clerk. In the same period (in 1567, according to R. G. Skrynnikov) during one of his visits to the Kirillov monastery he shared with some elders of his deep desire to haircut from them. In the same 1567 king gave 200 rubles in St. Cyril’s monastery itself to the cell. For all members of the brotherhood was made monastic clothing: rough beggarly garments goat fur, long black monk staffs, equipped with an iron blade, under a beggar’s robe hid rich clothes, embroidered with gold, belt – long knives. In the Alexander settlement established a special routine. The king himself rang the bell, served a moleben, sang in the choir of the guardsmen. Most likely, the monastic brotherhood in the Settlement was formed in the Wake of the conflict of Ivan IV by Metropolitan Philip. The head of the Church denounced the unjust life of the king. The presence in the village monastic brotherhood personally showed everyone that the Emperor leads the life of a Saint. Ivan the terrible with his brotherhood didn’t play. In 1570-1571, some brothers were stabbed to death or hanged at the gate of his own house, others drowned or thrown into prison.

Residence of Ivan the terrible in the Alexander settlement known and the fact that here the king held his famous parades brides. After the death of Mary Cherkasy Grozny did not look for a wife abroad, and ordered to rewrite noble girls-brides across the country. In Alexander suburb were brought 2000 “brides”. For several months they lived here, attracted the king “called” to himself, and after he tried one of his courtiers. The bride was allowed to select the first 24, then 12 of the most beautiful girls. The choice of a king fell on Martha Sobakina. Selection of Martha the Sobakina was caused, most likely, the participation of Malyuta Skuratov. Martha was his cousin. Using such an advantageous marriage Skuratov was relative terrible that seriously raised its “weight”. The sudden death of Martha allowed the same Skuratova to “MOP up” among his colleagues in the oprichnina leadership.

Transfer terrible in Alexander suburb was unprecedented in Russian history. In fact, almost 20 years Alexandrovskaya Sloboda became the capital of Russia. In the village of Ivan the terrible began to establish the first after centuries of isolation in international relations, to enter into an important trade and political agreements, to adopt the Embassy of the European powers. The terrible brought back the first Russian printing house, where he worked as disciples of the first printer Ivan Fedorov Andronicus Timofeev and Nicephorus Tarasyev, published in many books and even the first leaflets. In Alexander suburb after the Emperor came best architects, painters, musicians. When the court employed an iconography workshop, was created the first prototype of the Conservatory. There is reason to believe that Alexandrov Sloboda was the legendary “Liberia” – the lost library of Ivan the terrible.

Was there an alternative Alexandrov Sloboda? Yes, of course, was. Theoretically, the king could move, for example, in Vologda, but since the days of Basil III Alexandrovskaya Sloboda was a special place of power, the Imperial residence. Tsarist diplomats were ordered to explain to foreigners that the Russian Tsar went to the “village” on their own “for his cool”that his residence in “the village” is located near Moscow, so the king “the state rules and Moscow, and in the Settlement”. In a special way was organized protection of the Alexander Settlement. Approaches to the Settlement was protected by a reinforced guard. No one could penetrate into the Royal residence without special permits – “memory”. From Alexander Sloboda king almost twenty years conducted his political and social experiments.

In 1575 Ivan the terrible again abdicated the throne, and seated on the throne military Tatar Khan Simeon Bekbulatovich. Contemporaries did not understand the meaning of the idea of the monarch. A rumor was spread that the Emperor was frightened by the prophecy of magicians. News about retaining one of the later chroniclers: “And they say necii that planted (Simeon)that volkhvy he said that next year will be primenenie: Moscow Tsar will be death.” Warning this kind of autocrat received from the magicians and astrologers than once. Ivan began to call himself “a slave Ivashka”. But it is significant that the power of the “serf” for some reason continued to spread to the lands of the former Kazan khanate, where Ivan retained the title of king. Most likely, Ivan was afraid that, being under the authority of this Chingizid, Kazan perhaps rise in their spirit, chisel Simeon on the uprising. Of course, Simeon was not a real king, the uncertainty of his situation was aggravated by the fact that he took the Imperial throne, but received instead of only one Royal Grand titula the third month of the reign of Simeon Grozny told the British Ambassador that will be able to be ordained, when he pleases, and will come, as God will guide because Simeon is not yet approved by the wedding ceremony and appointed not by popular election, and only at his pleasure. The reign of Simeon lasted for 11 months, after which Ivan shifts it generously rewards Tver and Torzhok, where Simeon and dies back in 1616, having before his death monasticism. Almost a year Grozny conducted his experiment. Like a good chess player, he led a positional game.