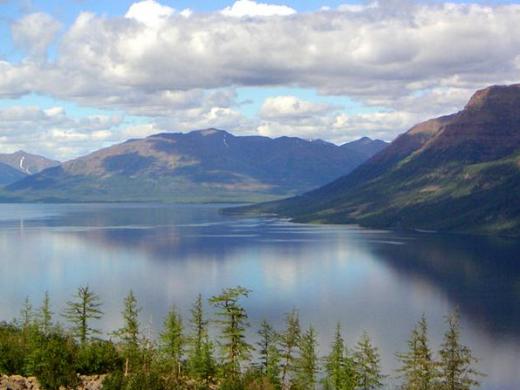 Lake Taimyr on the Taimyr Peninsula in the Krasnoyarsk Krai of the Russian Federation, is part of Taimyr nature reserve. The second largest after lake Baikal in the Asian part of Russia. Taimyr is the most Northern in the world this large lake is its extreme Northern point is North of 75 degrees North latitude. From oz. Taimyr follows R. bottom of Taimyr. The lake is covered with ice from late September to July, the average duration of the ice-free period – 73 days. The water temperature in August is +8 degrees C, in winter – slightly above zero. Permanent settlements there, on the lake is located inactive meteorological station. 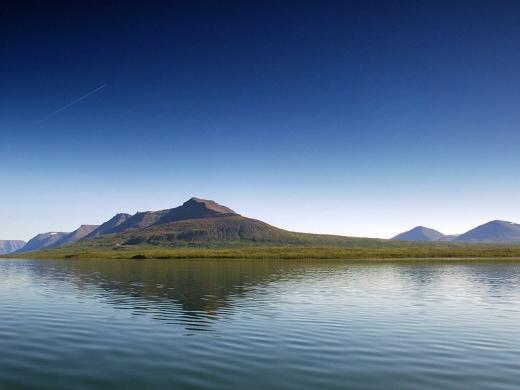 Is far beyond the polar circle, in the foothills Byrranga. Coastline is highly indented shallow bays and coves. Gentle southern coast is friable deposits of Quaternary period. North shore, with outputs of older rocks, rises sharply to the foothills of Byrranga, which in Taimyr into numerous tributaries. Some of the rivers start from mountain lakes, such as lake Levinson-Lessing. In the Western part a lot of rocky Islands, in the Eastern part is a sandy island Sokolova-Mikitov. The lake district is located in the climatic zone of tundra, widespread distribution of permafrost. The average annual temperature in the area is -13,4 °C, the average temperature of the warmest month – July – +12,3 C. Despite the large amount of precipitation in winter, the formation of large snow cover hampered by strong winds and flat terrain. In the summer of frequent storm, during which there is a strong turbidity of the water due to the shallow depth of the lake. For the characteristic lake level rise from early summer until August, followed by its decrease until the following spring, during which lost up to 75 % of water. Level change during the year leads to a significant – up to 30-50 % of the area of the mirror, to 84 % of the total lake Taimyr freeze to the bottom during each winter, including up to 25 % of the permanent lake waters. Seasonal decline in the water level can reach a height of 1.5 m above sea level and the area of lake Taimyr – shrink to 1 200 km2. The shallow depth and the water level dropped on average by 5.9 m in winter leads to deformation of the ice cover and propagation. The thickness of ice reaches 2-3 m, crack formation with the subsequent fall of ice accompanied by severe crackling noise. 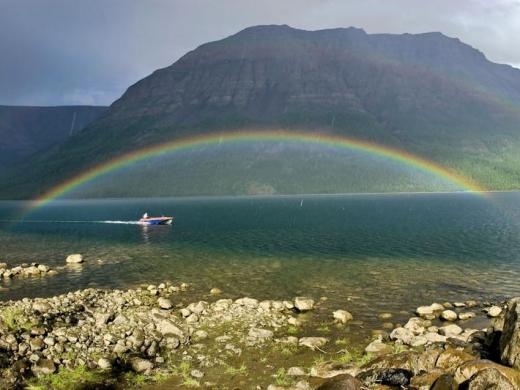 Despite its location in the lake is 20 species of fish. The most common species such as whitefish, whitefish, whitefish. Also found pike, omul, whitefish, grayling. In small amounts present Siberian sculpin. The Peninsula is inhabited by the following representatives birds: ducks, geese, swans, rough-legged Buzzards, swans, peregrine Falcon. Wintering birds fly away to warm countries, in the summer of return, in order to produce offspring. An interesting phenomenon observed in the lake Taimyr is the lack of higher aquatic vegetation, at a time when there are individuals related to marine aquatic complex and Baikal. In the Taimyr Peninsula is populated Arctic fish whitefish, whitefish, trout and others In the lake there are no representatives of the higher aquatic flora aquatic food chain of animals is based on the phytoplankton. During the winter the water falls amount of dissolved oxygen, since in summer the place demolished many organic substances. Perignane precipitation makes the area very deep depression unavailable for fish. Fauna of lake Taimyr were studied on the subject of adaptation dwelling in him types and possibilities of their resettlement in the Siberian reservoir, which also differ in significant changes during the year. Mainly in the Taimyr flora and fauna aquatic complex living organisms, there are also species characteristic of the lake Baikal. The appearance of the first species explain the message of the lake with the sea through the Lower Taimyra and changes of level of the world ocean in different historical periods. The presence of representatives of the Baikal ecosystem due to glacial periods, during which the hydrological regime of the region fluctuated with the formation of large glacial lakes in North Asia. The island of Taimyr are nesting grounds for migratory birds – the red-breasted goose, geese and other 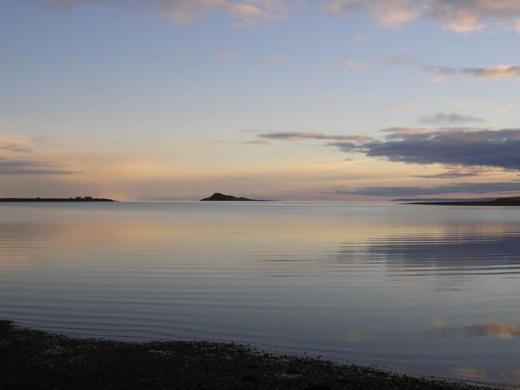 Lake Taimyr located in the severe North conditions of tundra and forest tundra. Here almost everywhere there is permafrost. In the area of lake Taimyr climate is slightly warmer than the other territory of the Peninsula. The average temperature throughout the year does not exceed -13,4 C in the warmest month July is +12,3 C. in Winter the region is characterized by persistent precipitation. While strong wind and plains prevent the formation of large snow layer. In summer, on the Peninsula of the sun is shining all day, shining with rays of the water surface of the lake. During this period, the lake becomes alive. In summer the lake is characterized by storm. Polar summer and Arctic winter to adjust their operations flora and fauna of the area. The plants grow faster, accelerating periodicaled. Chicks faster than in other climatic zones. All life is trying to pass through stages of development, during the short polar summer time. In the tundra, no germs, so warm-blooded organisms are easier to tolerate low temperatures. Ultraviolet rays, which are here in abundance, enhance the overall tone of organisms and at the same time, clean the air from germs. It is believed that in the summer in the tundra people will feel much better than usual climatic conditions.