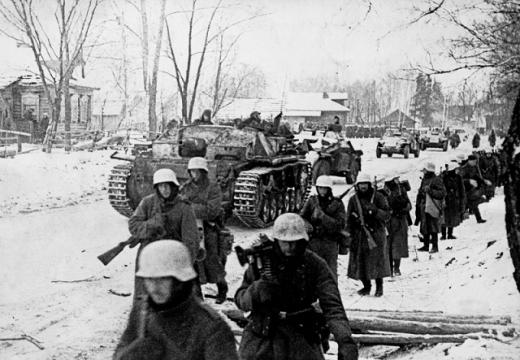 After the capture of Moscow, Hitler, in accordance with the plan for Operation Typhoon, intended to complete the campaign against the USSR. Let us reflect on how the course of the war could develop in the event of a hypothetical fall of the Soviet capital.

Not in our favor

Writer Vyacheslav Shpakovsky in his anti-utopia “If Hitler took Moscow” tried to model an alternative scenario of the Second World War. It turned out not very optimistic. According to the plot of Shpakovsky, on October 8, 1941, after fierce battles, the Soviet capital fell. In the summer of next year, at the height of the battle on the Volga Duga, the Germans deal a crushing blow to the Red Army and break through to the Baku oil. At this time, Rommel defeats the British in Palestine, and Japan, having defeated the Pacific fleet of the USA in the battle at Midway, declares war on the USSR … Military experts say that Germany had at least theoretical chances to master Moscow until the end of 1941 . If the campaign “Barbarossa” began not in June, but in May, as planned, the Germans could already in August, under favorable weather conditions, launch a decisive offensive against the Soviet capital.

Publicist Timur Sherzad writes that much then testified in favor of Germany. At the beginning of the war, the German armed forces had an undeniable advantage over the Red Army, since the latter had not yet completed the rearmament process. An equally serious problem for the Soviet General Staff, Sherzad continues, was the lack of experienced commanders – the consequences of the Civil War and Stalin’s “purges” affected. The repressed officers had to be replaced by someone, the only way was to increase the rank of their junior military comrades who did not possess sufficient skills for a more responsible post. In addition, middle commanders in the Red Army often did not have the “officer” experience of actual combat operations. In the German army there was a different picture. A significant part of the higher officers of the Wehrmacht had not only a two-year experience of the European campaign, but the First World War. In the summer and autumn of 1941, with the concomitant circumstances, such an advantage could bring Germany fruit in the Moscow direction.

The fate of Europe

The Belgian military leader and ultra-right politician Leon Degrel assumes that Hitler could enter the Kremlin “from which he was a quarter of an hour away by tram”, how he entered Vienna in 1937, to Prague in 1939 or Compiegene 1940 year.

“What would become of Europe?” – the first thing that worries the Belgian. Hitler would unite Europe by force, this is undeniable. However, this would not be done by democratic methods, “Degre believes. It is likely that with this development of events, part of Europe would work for the Reich industry, the other would serve as a resting place for the German elite. However, most researchers are concerned with the more global consequences of the alleged capture of Moscow. For example, the author, published under the pseudonym Frank Christopher Tike, suggests that this would lead to a quick victory of the Reich. In this case, according to his forecasts, the losses of the German army would be 200-250 thousand soldiers, the Soviet – 600-700 thousand. The further course of events in Taiku history is the following. In 1943-44, the Germans invented nuclear weapons and threatened them by the United States. By 1955, Germany carried out the first manned flight into space, a few years later the Germans landed on the moon.

In parallel, another superpower is emerging – Japan, which takes possession of Sakhalin, China and many countries of the Far East. The State of Israel would never have appeared, since the Jewish people in most countries under the pressure of fascism would be exterminated. The single world currency on the planet would be the German Reichsmark “with the image of the greatest warlord and conqueror on Earth, Hitler” and the Japanese yen. England, according to the scenario of Taika, is included in the lands of the Third Reich, and the US is turning into a “quiet, inconspicuous state” with a ban on the development and testing of nuclear weapons. Islam, having lost the oil and money foundations in the “Germanic world,” no longer has any noticeable influence.

According to the prepared scenario

And what after the fall of Moscow could happen to the USSR? Many military experts say that in case of surrender of the Soviet capital and government, the plan developed by Hitler before the invasion of the Soviet Union – “Directive No. 32” would be implemented.

In the European part of the mainland Germany was going to dominate with Italy. Russia would have joined the Urals in the “Great Germany”, but previously the European part of the USSR according to the “mission of Oldenburg” was subject to total looting. And further this territory would be divided into 4 inspections: Holstein with a center in the former Leningrad, Saxony in Moscow, Baden in Kiev, Westphalia in Baku. The territory of Western Ukraine, Belarus, the Baltic, the Crimea, the Volga region, Hitler intended to completely clear of local ethnic groups, populated by the Germans and included in the Reich. Kola Peninsula because of the huge number of mines would be used only as a raw material base, and Central Asia was to become an agricultural appendage of the new empire. As soon as the German army was fed enough, shod and dressed, the time of the death of the population of the USSR remaining in the occupation up to the Ural Mountains would have come.

BBC columnist John Barber believes that in the case of the surrender of Moscow, the country would not capitulate. However, the Soviet leadership evacuated to Kuibyshev would have been compelled to conclude peace with Hitler, “having given him a significant part of the European territory of the USSR in the hope that the new Treaty of Brest-Litovsk will help him survive.” But the future of the USSR, according to Barber’s assumptions, would be unenviable. Reducing the population in industrial and agricultural regions would undermine the ability of the government in exile to continue the struggle, and until recently the mighty Union would have broken up into many small states. The British journalist believes that the consequences of the collapse of the USSR for the West would be very serious. Given that all the resources of mainland Europe were under Germany’s control, Britain’s position would become hopeless, the threat to the US, which would soon have to confront Japan in the struggle for domination in the East, sharply increased. The battle for Moscow should be considered the turning point of the entire Second World War, – concludes Barber.

The capital is not everything

A number of experts believe that Moscow, as a city to Hitler, was absolutely unnecessary. “Hitler needed an ashes in this place,” says Alexander Grishin, a columnist for Komsomolskaya Pravda. – This was clearly stated in his plans. Hitler needed a pond, a man-made sea on the site of the capital of the USSR “. Many researchers believe that Hitler was well aware that with the fall of Moscow the war would not end, but would only gain another direction. It is necessary to take into account three factors complicating the Wehrmacht’s tasks of conquering the USSR – giant spaces, a harsh climate and human resources. All this multiplied by the heroism and dedication of Soviet citizens could become an insurmountable obstacle to the final subordination of the country’s territory.

The journalist of the Moscow Komsomolets Alexander Minkin suggests that if in the fall of 1941 Kutuzov found himself and left Moscow, Stalin would certainly shoot him. However, if the surrender of Moscow, in those conditions, it would be justified step, – said the expert. “Do not put mountains of corpses under the tracks of tanks. We must be able to fight. The war can not be won by gigantic blood. The war can be won by the mind, “the journalist is sure. According to Minkin, the seizure of the capital in 1941 did not mean that it would be forever. “We would have won all the same, but with fewer losses.” In addition, Minkin is convinced, Britain and the United States would not refuse allied commitments and would support the Soviet Union. However, if victory was not achieved by May 1945, in August an American atomic bomb would fall on Berlin, the journalist suggested.

“Death from a thousand cuts” would be waiting for Germany in the event of the capture of Moscow, believes the Canadian author Robert Grimmink. The protracted conflict, in his opinion, was unprofitable for Berlin. Under no circumstances would Stalin give up. Russia’s industrial regions east of the Urals, which were beyond the reach of the Nazis, played into Russia’s hands, the Canadian is convinced. For Grimmink it is undeniable that the seizure of Moscow would be a temporary occurrence. He further writes: “The Soviet Union had 18 divisions stationed in Siberia, who were expecting an attack from Japan. Since the Japanese were not going to attack, in case of the seizure of Moscow, these troops would probably be sent to Moscow. ”

The Siberian divisions, well-equipped and prepared for warfare in unusual climatic conditions for the Wehrmacht, would have beaten the capital off the Nazis exhausted by the endless defense, who would not have been ready to fight the fresh forces of the Russians. In this, the Canadian writer does not even doubt. Hitler himself, apparently, hoped only to seize the European part of the USSR and did not look beyond the Ural Range. Here are his words: “Never in the future should military education be allowed west of the Urals, even if we had to fight 100 years to prevent it. All my successors should know that Germany’s position is firm only insofar as there is no other military power to the west of the Urals. ” Almost all experts are unanimous in that if Hitler took Moscow, the capital would be moved beyond the Urals. This would allow the Soviet government to gather strength, build a new industry and, ultimately, regain lost ground. The authors of the historic historic port of HistoryNet are sure of this. It notes that if Russia lost the major cities and branches of the European part, it would still defeat Nazi Germany.