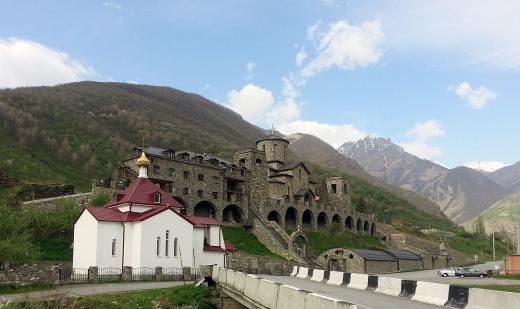 In the Middle Ages in the territory and around the monastery was the family settlement of the Gusovs, in the 17th century, and then in the 18th century, there were two large guard towers that now fit in the monastic complex and serve as a bell tower. In 1848, the church of the Holy Wives, the world-bearer with the parish priest’s house, appeared on the territory, which served until 1928.

The basis of the monastic brotherhood was the Ossetians, who had been undergoing spiritual training in the Rylsky Nikolsky Monastery from 1997-1999, where, shortly before his death, Archimandrite Ippolit (Khalin) instructed them. He told the workers to go to Beslan.

Under the monastery that was formed in Beslan, the church of the holy martyr Varvara (the former depot depot of the Beslan station), created at the initiative of the priest of the parish priest Sergiy Maltsev, was handed over, in agreement with the head of the Pravoberezhny district of the RNO-A Borisov Mikhailovich Urtaev and the head of the Orthodox fund “Assumption” Natalia Fyodorovna Nosova, with the blessing of Metropolitan of Stavropol and Vladikavkaz Gideon. The first inhabitants of the monastery arrived in the city in January 2000, and the monastery was established by the synodal decision of April 19, 2000.

The community of the St. Barbara church moved to the built baptismal church of St. George the Victorious of the city of Beslan, which is part of the Holy Trinity Church complex. Over time, the monastery moved to the Kurtatinsky Gorge, where the temple of the holy wives of the Myrrh-bearers of the XIX century was rebuilt, and a larger larger Cathedral of the Mozdok Icon of the Virgin was also built. In Beslan there was a monastery courtyard. 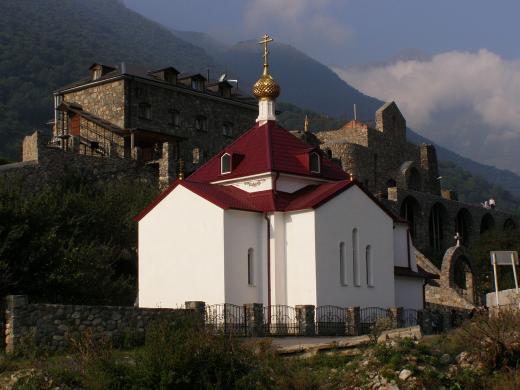 During the 2000s, the Uspensky Monastery became the second spiritual center of Alanya along with the Alanian convent, pilgrims from all over the south of Russia, as well as pilgrims from South Ossetia began to travel to the monastery. The monastery actively participates in the work of the department for the translation of liturgical texts into the Ossetian language. Divine services are held here in the Church Slavonic and Ossetian languages.

In August 2010, the monastery was visited by the Patriarch of Alexandria and All Africa, Theodore.

In 2011, on the feast day of the holy Myrrh-bearers, Divine Liturgy was performed by Shhiarchimandrite Ily (Nozdrin).

In November 2011, in the territory of the monastery and around the believers of the republic, a conflict arose with the transfer of Archimandrite Antony, who, after a short time, by the decision of the Patriarch of Moscow and All Russia, peacefully resolved.

Weekly from the city of Vladikavkaz, every Saturday early morning, a bus with pilgrims from the city and districts of the Republic leaves, as well as daily pilgrimage buses from different regions of Russia visit the monastery: Rostov Region, Stavropol Territory, Kalmykia, Chechnya, Volgograd Region, as well as individual tourists from Moscow, St. Petersburg, and other cities of the country. According to rough estimates, about 15-17 thousand people visit the Monastery of the Assumption for two or three days. And in the winter time for the holiday of the Epiphany to the monastery come about 50 thousand people.

The administration of the monastery actively participates in diocesan assemblies, and important ecclesiastical measures of the diocese. 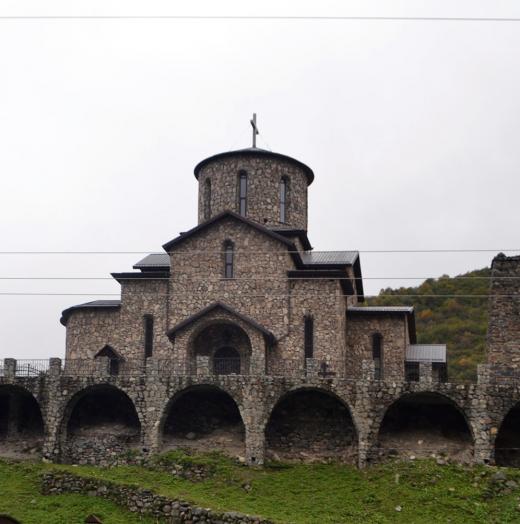 Monastery of the monastery

Economy of the monastery