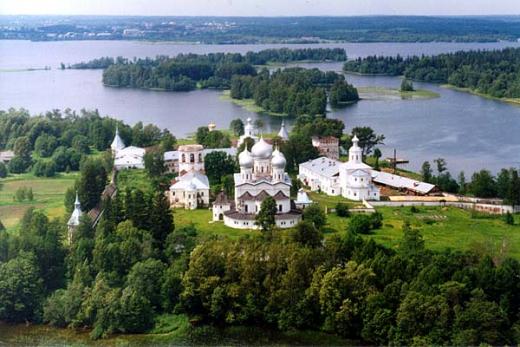 At the end of the 15th century on the highway between Moscow and Novgorod in the place where now is a modern city, there was a village Valdaiskoye. Valdai from 1654 to 1764 years belonged to Iversk monastery. In 1770, the village got the status of town. The city of Valdai was the significant trade and craft center on the way from St. Petersburg to Moscow. With the end of the 18th century and to this day Valdai famous for its craftsmen for casting bells. Since 1995, the city has a Museum of bells, to learn all about the history of the bells in Russia, casting techniques, different assignments bells, and which displays the bells of different epochs and countries. The Museum is located in the building of the former limit of the Church of Catherine II, which was built in 1793. In the Museum of bells, you can not only see the exhibits, but also to listen to a variety of bell ringing, see the technique of bells, to get acquainted with the methods of bells skill, and try to ring the bell himself.

In Valday in the mansion noblewoman Mikhailova (19th century) is another Museum – Museum of the district town. Here is a story about the history of the Valdai region and disclosed feature of the Russian province.

Of the architectural sights of the city can be divided into the Church of the Apostles Peter and Paul middle of the 19th century, Holy Trinity Cathedral (1744 year), which rises in the heart of Cathedral square and the Church of the presentation of the blessed virgin in the temple of the Lord 1762.

The city of Valdai is located on the territory of the national Park “Valdaisky”, which was established in 1990. Now it occupies an area of 158 500 Ha. The Park is especially popular among the tourists as it is located near to the cities of Moscow and St. Petersburg. Its main purpose is to preserve the unique lake-forest complex of the Valdai hills.

Valdai upland is a watershed basins of the Baltic and Caspian seas, here originate rivers such as the Volga, Dnieper and Western Dvina. Upland consists of a number of moraine hills and ridges, between which are located a lake. The average height on the territory of the Park is 100-200 m, maximum – 343 m in Total in national Park 76 lakes, largest of which – Valdai, Veljo, Dinner, Borovno, the Park has also a part of lake Seliger. The depth of large lakes exceeds 10 meters, The deepest lake in the Park – Valdai, its maximum depth reaches 52 M. This lake is one of the cleanest in the world.

Valdai lake and lake Seliger are acknowledged centres of fishing in Russia. Here you can catch pike, catfish, bream, whitefish, vendace, burbot, perch, smelt, tench, carp, Golden and silver carp and even European grayling, trout and one lamprey. In addition, Valday travel not only fishermen and divers, both in summer and winter (for classes ice-diving). The lake is famous for excellent visibility, in some places it reaches 10 m immersion Depth not more than 8 M. water Temperature of the lake in June-August varies from +20 to +25 degrees, but at a depth of 8 M. it is not more than +10 degrees. In winter water temperature in the Valdai lake is kept at +2…+3 C. Here you will see a variety of fish, especially interesting instances (for example, predators) can be observed during a night dive.

On the shores of the lake there are many recreation centers. In the Park’s lakes mined therapeutic sulfide-silt sapropelic mud, which are used in sanatoriums of the region.

In the national Park “Valdaisky” there are many cultural attractions. On these lands since ancient times lived Slavs, from those times remained here Parking 7-6 centuries B.C. the ancient settlements, settlements and burial mounds. On one of the Islands of the Valdai lake and 10 km. from the town of Valdai is one of the most valuable monuments of architecture of the Novgorod region – Iveria virgin Mary Svyatoozersky monastery. The monastery was founded in 1653 by Patriarch Nikon. In this year on the island came the wooden churches – Church in honor of the Iberian icon of the Mother of God and the temple in the name of St. Philip of Moscow. The first stone building of the monastery became a Cathedral in honor of the Iberian Mother of God (1655 year), which in the early 18th century after a great fire was reconsecrated in the assumption Cathedral. Patriarch Nikon was planning to turn the Iversky monastery in the main monastery of the state, make it a stronghold of Orthodoxy of Russia. However, after the deprivation of the rank of Patriarch monastery began to decline. In the years of Soviet power, he was completely closed and opened only in 1997. From the monastic buildings survived the five-domed assumption Cathedral, refectory, bell tower, monastic cells, stone fence with two corner towers and Overgate Church of Michael the Archangel. Recently in the monastery there is a small Museum dedicated to Patriarch Nikon and the history of the monastery. Get to the Iveria monastery can be on a boat.

Very beautiful monuments of landscape art, preserved on the territory of the Park from the landed estates 17-19 centuries. In the village of Nikolskoye on the shores of lake velye is located the first Russian fish factory, outdoor founder Russian practical ichthyology V.P. Vrasski in the middle of the 19th century. There is also a Museum of Vladimir Petrovich Vrasski.