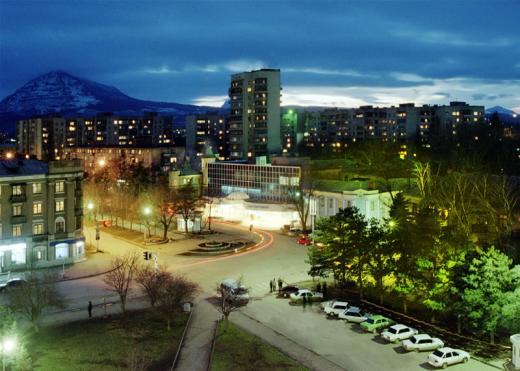 Kavminvody lie on the Northern slopes of the greater Caucasus mountain chain, within which is the highest point of Europe – mount Elbrus (5642 m). Resort area can be divided into two zones: the Northern, which includes the city of Pyatigorsk, Yessentuki and Zheleznovodsk, and South, where the city of Kislovodsk.

Resort region Caucasian Mineral Waters (Kavminvody) is located in the Stavropol territory. It includes such resort cities as Essentuki, Zheleznovodsk, Kislovodsk and Pyatigorsk, and is the largest health resort in Russia. Caucasian Mineral Water feature more than 130 mineral springs and reserves of silt mud, extracted from the Tambukansk lake. Each of resort towns, depending on the composition of sources and microclimate, specializes on treatment of various diseases. Today sanatoria of Caucasian mineral waters have a modern diagnostic base equipped by the last word of techniques. Regional centre of the Spa district is the town of Essentuki, but the main transport hub of the city Mineral Water (there is an international airport and junction railway station of the North-Caucasian railway). Kavminvody lie on the Northern slopes of the greater Caucasus mountain chain, within which is the highest point of Europe – mount Elbrus (5642 m). Resort area can be divided into two zones: the Northern, which includes the city of Pyatigorsk, Yessentuki and Zheleznovodsk, and South, where the city of Kislovodsk. Resorts of the Northern zone lie at altitudes of 500 to 600 meters, and the town of Kislovodsk – at altitudes from 800 to 1069 m Kavminvody are known for their curative microclimate with a large amount of heat and moderate rainfall. The air here is clean and oxygenated. The most favorable for the treatment of climate possesses the city of Kislovodsk. This is the Sunny resort of Caucasian Mineral Waters (in a year there are about 300 Sunny days), on all sides he is surrounded by mountains that protect it from the cold winds. The healing properties of the Caucasian sources were known to local residents since ancient times. Their study at the state level began with Peter the great and already by the end of the 18th century it began to come people from different corners of the country for treatment. April 24, 1803 Alexander I issued a decree on the improvement of Spa areas in Stavropol territory. This year is the year of education Kavminvod. Here came the richest people of the country, as well as cultural figures. M.Y. Lermontov’s been here many times and in his novel “a Hero of our time” describes the local places.

The main method of treatment on resorts of the Caucasian mineral waters is the use of local mineral waters of various chemical and gas composition. They are used for internal use (mineral water drinking, washing stomach, duodenal probing changes (drainage), rectal procedures inhalation finely распыленными particles of mineral water) or for external application (baths, underwater spine traction, massage shower, underwater shower-massage, sitting baths, rising douche, local baths for arms and legs, irrigation head, bathing in a swimming pool). In Kislovodsk are deposits of carbonate sulphate-hydrocarbonate calcium-magnesium water “Narzan”; in Essentuki – acidulous hydrocarbonate-chloride sodium water of “Essentuki”; in Pyatigorsk – acidulous waters, carbon dioxide hydrogen sulfide waters complex ionic-salt composition, radon water, methane water with high content of iodine and bromine and poorly acidulous chloride sodium waters of the Arzni; in Zheleznovodsk – the only in the world of hot calcium waters and hydrogen sulphate-hydrocarbonate calcium-sodium waters. In health resorts of the Caucasian mineral waters are widely used mud in the form of wraps and applications. Black silt sulphide mud tambukansky lake are rich in salts, sulfur iron and contain hydrogen sulphide, methane and carbon dioxide. In addition to these methods of treatment on resorts of the Caucasian Mineral Waters practice hydrotherapy or hydropathy, Speleology – for external use in treatment-and-prophylactic purposes, fresh and mineral water (a circular arc massage, Charcot’s douche, underwater shower-massage, vortical bathes, chamber baths, underwater traction, fan shower-massage, contrast baths, douches, wiping); climate therapy – the use of the healing properties of the climate – which includes aerotherapy (prolonged or persistent stay outdoors), heliotherapy (the use of solar baths) and thalassotherapy (treatment of swimming in open water); nutritional therapy (about 40 diets) and path – dosed walking (striping walk in an equal place and rugged terrain with a different angle with the purpose of regulation of circulation). The main specialization of the sanatoriums of Kislovodsk are diseases of cardiovascular system, in our days Kislovodsk is the leading cardiac resort in Russia. In Essentuki the diseases of gastrointestinal tract, liver and metabolism, it also has a Center for the treatment of diabetes and opened one of the biggest mud Europe. Pyatigorsk is known for its success in the treatment of diseases of nervous system, musculoskeletal apparatus, digestive apparatus and skin diseases. Zgeleznovodsk sanatorium specializes on treatment of diseases of organs of digestion, kidneys, urinary tract and metabolic disorders. In addition to resorts Kavminvod in treatment of gynecological and urological diseases, respiratory diseases and diseases of the ear, nose and throat. Thus, all the resorts Kavminvod are diversified.

Of the attractions of Kavminvod of special interest are the places connected with the name of Mikhail Lermontov. He’s been here in childhood and during the Caucasian links, when it was written story “Princess Mary”. 3 km. from the town of Kislovodsk in the gorge of the river Olkhovka is Lermontovskaya rock. These places became the backdrop for the duel Pechorin and Grushnitsky of the above story. In Pyatigorsk are State Museum-reserve M. et al Atlas Lermontov where in 1841, the poet spent the last two months of his life, Diana Grotto (a favorite vacation spot Lermontov), a notorious Place of duel, where 15 July 1841, the poet was mortally wounded by a major Martynov, Pyatigorsk necropolis with the original place of burial of Lermontov, as well as depicted in the story “Princess Mary” famous Failure, Eol harp and the Grotto of Lermontov.

In addition to guided tours to the main attractions of resorts and their surroundings, in Caucasian mineral waters resort offers tours of the Great Caucasus mountains. Only 65 km southwest of the town of Kislovodsk is the highest point in Europe – mount Elbrus (5642 m). On the slopes of Elbrus a national Park “Prielbrusie”is known as a center for eco-tourism and active tourism (mainly mining and sports and ski) of the Caucasus mountains. Not far from the village Terskol, there are ski lifts that bring tourists to the ski area of Elbrus.