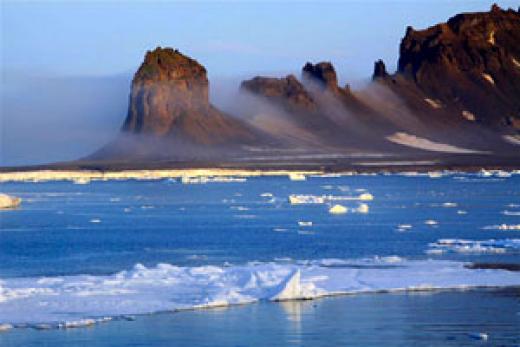 Since ancient times, the Arctic was a mystery, although sometimes the mortal danger, always attracted human. Someone in the northern latitudes attracted passion for geographical discoveries, someone – the rich possibilities for catching fish and marine animals, someone just wanted to become famous, and someone – to demonstrate their heroism and perseverance.

It has been established that in XI-XII centuries to the New Earth – a group of islands located between the Barents and Kara Seas – moored ships inhabitants of Novgorod. In 1596, Willem Barents rounded the northern tip of the North Island and spent the winter on the eastern coast. Now, there is a national park “Russian Arctic”.

The National Park includes the northern part of North Island island of Novaya Zemlya, Large and Small Orange Islands, Loshkin island Gemskerk and several other islands. The land area of ​​the “Russian Arctic” is 632,090 hectares, the water area – 793,910 hectares.

The unique location of the national park, which has spread its open spaces on the Eurasian border, defines a number of its features. Barents Sea washes the park from the west, under the influence of the warm North Atlantic Current is not completely frozen. Eastern Kara Sea, on the contrary, is covered by a continuous ice for months. A relatively small distance from the mainland and higher winter temperatures cause a greater diversity of life than in other Arctic areas. 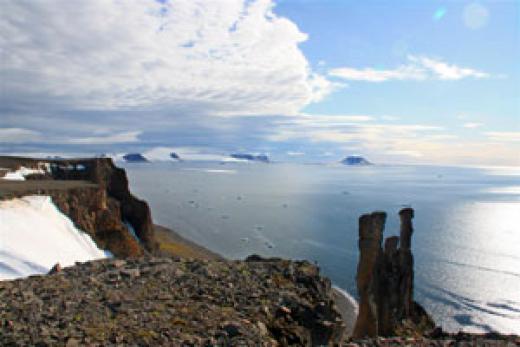 In the “Russian Arctic” meet polar bears, walruses, seals, harp seals, arctic foxes and even reindeer. In short server summer their leaves to the polar sun turns the plants of which there are 64 species. Orange islands with their sloping cliffs – a paradise for a variety of polar birds. Here, take their young to 20 species of birds and 5 species dare to stay for the winter.

To the group of characteristic and memorable objects “Russian Arctic” belong mountain Lomonosov and the mountains Mendeleev. Here are the amazing beauty of the polar landscapes.

The birthday of the reserve is considered to be the April 23, 1994, then the order of the Government of Russia approved the conservation status of the archipelago of Franz Joseph and parts of the Maritime area. Under the land portion of the reserve in this document is given to the entire archipelago – 1 635 300 hectares the Total area of specially protected natural area is 4 200 000 hectares.

The archipelago of Franz Josef Land is located in the north-eastern part of the Barents Sea and is the northernmost portion of the land of Eurasia. On administrative-territorial basis, he is part of the Primorsky Municipal District of the Arkhangelsk region.
The existence of these lands have predicted great Pomor MV Lomonosov, but due to their distance (the distance to the North Pole – 900 km, the Kola Peninsula – 1,200 km, the New Earth – 360 km) and the inaccessibility of the archipelago was discovered only in 1873 by the expedition Weyprecht K. and J. Payer. It was named in honor of the Austro-Hungarian Emperor Franz Joseph I. In the XX century, a man left a significant mark on the archipelago: the barrels out of fuel, spent his technique – not the most attractive, but it is no less salient features of Franz Josef Land.

Geographically, the Franz Josef Land is a group of 191 islands, stretching from east to west 375 km from north to south – 234 km. Constantly reaching relief-forming processes can lead to a change in the number of islands. So, in 2008, near the island Hortbruk opened a new island, named after the captain of the Arctic Yuri Kuchiev.

It is interesting to note that 71% of the total number of islands occupy only 0.4% of its area. Only 4 of the island (George Land, Wilczek Land, Graham Bell, Alexandra) have area exceeding 100,000 hectares. 85% of the area of the Franz Joseph glacier-covered, this is the most glaciated land area of the Russian Arctic.

All the Islands of the archipelago belong to the climatic zone of the Arctic deserts. Average temperature of January is 24°C, July -1,5-0°C. in Winter the temperature can drop below -50°C.

Despite the truly harsh climate, the archipelago is not a lifeless space. Its unique nature and its fascinating. In few other places in these Islands to choose the hosts of the Arctic – polar bears – for the birth and upbringing of their kids. Walrus, ringed seal, bearded – amazing mammal species chosen Franz Joseph and the waters around it as home. In the sea, near the sanctuary can be found right whale, sea unicorn – narwhal, Beluga whale. Numerous rocks of the archipelago hatching 15 species of birds. 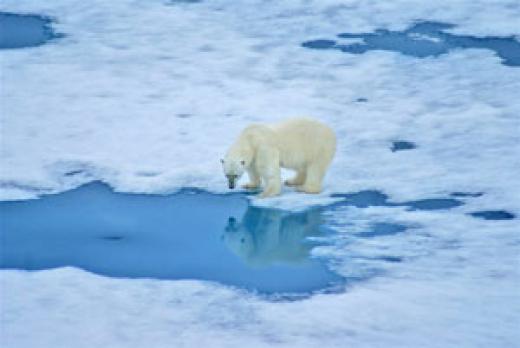 Security functions of the reserve “Franz Josef Land” Works to restore its original appearance and Conservation of Cultural Heritage “is currently implementing FGBI” National Park “Russian Arctic”.
Franz Josef Land and the adjacent water area plays a crucial role for the reproduction and the continued existence of many populations of Arctic species.
Firstly, the Franz Josef Land is the most important from an environmental point of view, the area of ​​the western sector of the Arctic is home to five species listed in the Red Book of the Russian Federation and the International Red Book.
The archipelago reproduces a substantial part of the Russian and world populations of ivory gull, a rare native species of the Arctic; on the islands of the largest known colony of gulls in the Barents Sea.
The water area of Franz Josef Land – a key area of ​​the present range of the Spitsbergen population of bowhead whale, the rarest marine mammal in the North Atlantic. Franz Josef Land – the area most frequent meetings of whales and their place of year-round habitat. Due to the surviving animals here, Svalbard population slowly began to recover its size and range.
The water area of Franz Josef Land – a place most regular meetings narwhals in the Russian Arctic.
Franz Josef Land – a key area for the maintenance and reproduction of Atlantic walrus, which is due to the presence of recurring polynyas, lives year-round in the archipelago. Here focuses a significant portion of vostochnoatlanticheskoy subpopulation subspecies. As in the case of a polar bear, northern Barents Sea population inhabits a single walrus, and, thanks to the expanded reproduction of surviving on the Franz Josef Land walrus groups in recent decades is a restoration of the number of the beast and the recolonization of islands of Svalbard.
On the islands is an important focus of the polar bear reproduction of the Kara-Barents Sea population. During the summer there is increased as compared to the neighboring regions, the density of the population of polar bears.
Secondly, the archipelago is important for the preservation and maintenance of ornithological diversity of the Russian Arctic.
Here are concentrated most of the Russian breeding population of Atlantic subspecies fulmars and Arctic subspecies Lyurik.
On Franz Josef Land are located the most northern of the world’s known breeding colonies of Thick Billed Murre.
In the archipelago are the only ones in Russia proved nesting Atlantic subspecies of black brant, the main nesting Greenland subspecies of Common Eider. 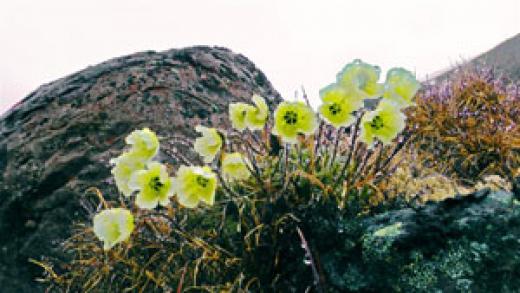