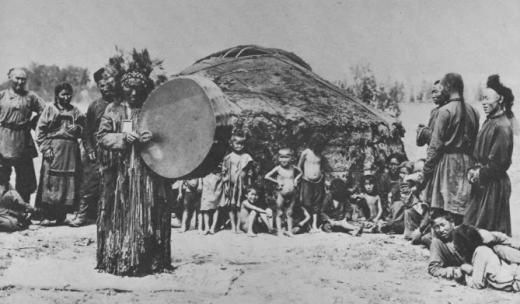 Tuva is located in the heart of Asia, and almost isolated from the world. Due to this, the edge of the Scythian burial mounds, Chinese palaces, shamans and strange customs managed to maintain its unique identity.

The Center Of Asia.

Republic of Tyva – one of the most picturesque places in Russia. It presents a variety of landscapes, from mountains to steppe, from taiga to semi-desert. Nature Tyva has healing power. The inhabitants of the republic used for medicinal purposes cold and hot mineral springs, and the water from the saline steppe lakes.

In the north and east of its envelope ridges and spurs of the Sayan Mountains. In the west of the Altai Mountains are located, among them – the highest point of Tuva – Mount Mongun-Taiga, which means “Silver Mountain”.

In the capital of Tuva, Kyzyl is the Center of Asia, marked by the obelisk. Back in the late XIX century English traveler, whose name remains unknown, identified by the then maps the place where is the geographical center of Asia, and established there a modest stone pillar. Later, this point has been clarified, and the column was moved 25 kilometers downstream of the Yenisei, in Kyzyl. In Soviet times, it was replaced by concrete obelisk, and today its plan to establish a new location monument, topped Scythian gold deer. 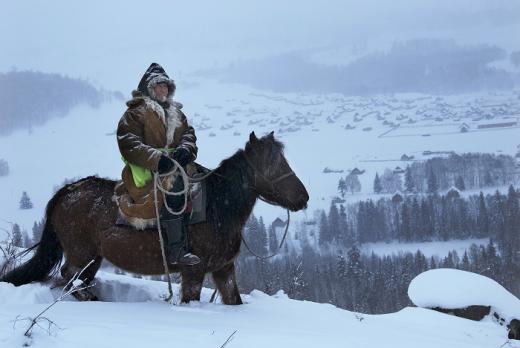 In pre-revolutionary Russia were called Uryankhays they themselves call themselves tyvalar, we are accustomed to call them Tuvinians. Surprisingly, these people are genetically similar to the American Indians, the scientists even suggest that the ancient ancestors of Tuvinians participated in the colonization of America.

On the territory of the Republic of Tyva lived nomads, whose arms and horse harness similar to the Scythian. Compared with the other inhabitants of Asia, Tuvans fairly large admixture of European blood. There is even a suggestion that in ancient times they dominated European features, but with the invasion of nomadic cultures of Central Asia, including the Xiongnu invaders, the locals have become closer to the Mongoloid race. They said (and still say) in the language of the Turkic language family.

Direct ancestors of Tuvinians – Uighurs – were quite developed peoples. In the Middle Ages, they had their own runic writing. In 1207, the territory of Tuva Mongol forces invaded. At the head of the eldest son of Genghis Khan – Jochi. He meets fierce resistance militant Tuvinians. Once these lands were conquered, Khan’s tax collectors demanded from them the most beautiful girls for their rulers. This deeply offended Tuvinians, and rebellion broke out that engulfed the whole Minusinsk depression, the territory of Tuva and Altai.

Even in ancient times Tuvan tribes moved to the nomadic way of life, as their main occupation was herding. Settled on the land they are only in the middle of the XX century.

Tuva is not only rich in natural resources, but also the historical monuments. In the valley of the river Uyuk is unique mound complex, which for the wealth and extent (some mounds reach 100-120 meters in diameter) are sometimes called the Valley of the kings. The most famous group of mounds with the common name “Arjan”. Arzhan-1 was investigated in the 70-ies of XX century. Unfortunately, his plundered in ancient times, but archaeologists still got rich and amazing stuff. In Arzhan-1 was buried older man, most likely leader of the tribe. In addition to his mound lay the bodies of 16 people and 160 horses. From this mound there is one of the symbols of Tuva – Golden Panther, curled into a ring.

Even more unique finds were made in Arzhan-2, which are known as an archaeological sensation of the XX century. In this huge mound with a diameter of 80 meters, scientists have discovered about 20 kilograms of gold jewelry, glassware, jewelry, religious items.

Due to the permafrost, in the mounds are remarkably well preserved remains and animal skins, felt carpets, clothing and footwear, and buried where people naturally mummified. All of this can be seen in the National Museum of Tuva and the State Hermitage Museum.

The palace in the steppe. 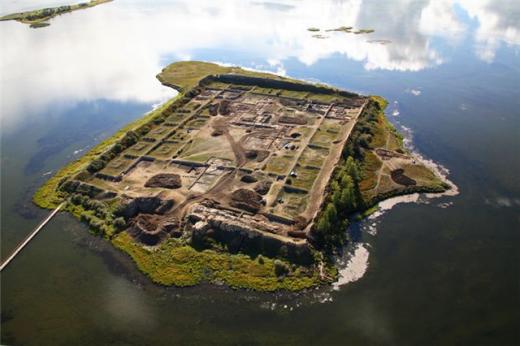 Other archaeological sites of Tuva is Por-Bajin. Imagine a lake in the wilderness, smooth as a mirror. In the center of it – several islands, where the largest of them stands the ancient fortress. This is the Por-Bajin, in Tuvan – “clay house.” He really was made of clay, or rather – of mud brick. Por-Bajin covers an area of more than 3 hectares and is surrounded by walls that are in ruins, and up to ten meters, and once were even higher.

The fortress was built in the VIII century BC. In Tuva no more, no such structure, but they are typical of China. Where did “mud house” middle of the steppe?

According to legend, one of the Uighur Khan helped the Chinese Emperor to quell the rebellion on the border of the state. For this the Emperor was married to Khan for his daughter. It was hard for the Princess to go in the wrong barbarian land, she took a masters from China, which was built for her and her husband’s traditional Palace with a tiled roof, dragon Mord-“masks” and wall murals. But nomadic nature in the Uighur Khan won yet, and maybe he was afraid that sitting in one place will attract the attention of enemies. Anyway, he left Port-Bazhyn pretty quickly, the castle was virtually uninhabited.

At the crossroads of religions. 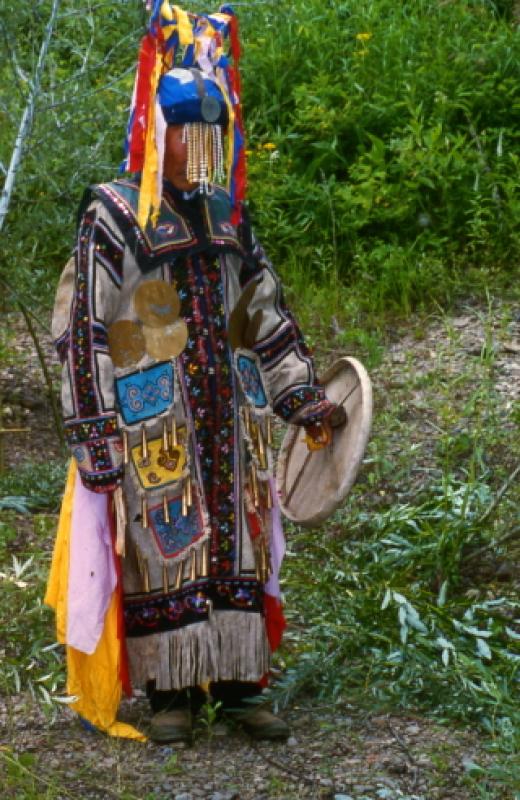 Tuva was at the crossroads of several worlds and religions, here peacefully coexist Buddhists, shamanists and Christian believers. Buddhism appeared in Tuva in the XIII century, when it became part of the Mongol Empire, but the present distribution of this religion was only in the XVIII century, when Tuva got into subjection to China and there began his missionary work Mongolian lamas. Buddhist monasteries are not only centers of culture, but also the large feudal economy. They own the land, are trading on their working set of the peasants.

Buddhism had a great influence on the traditional religion of Tuvinians – shamanism, especially in the rites of the life cycle: weddings, maternity and funeral ceremony. Nowadays, among the inhabitants of Tuva common syncretic views (ie, combining both religions). With some problems, they go to shamans, with the other – to the Buddhist Lama.

By means of Tuva shamans resort in different cases, but more often during illness. Shaman serves as a mediator between the world of humans and the world of spirits, he may by a special ceremony, the ritual return to the place of the human soul and to banish from his home sickness. Coming out of the trance, during which the shaman travels to the spirit world, he told the audience about what he saw during his travels.

Old Believers Tuva – a closed group of people living compactly in the most remote places of the republic – the headwaters of the Yenisei. Not even know their exact number – An estimated 500 to 1,000 people. Where did they come in Southern Siberia? They have moved here in the late XIX century. While Tuva was foreign territory abroad, and the Old Believers were hoping to find here the salvation of royal taxation and military service. But other than that, to the north of them attracted legendary quest Belovodye place where supposedly Christian faith is preserved in its unspoiled state. It is not known if they found it or not, but they have found a new home for many years.

Directly associated with shamanism “Khoomei” – Tuvan throat singing. Its uniqueness is that the artist removes just two or even three notes simultaneously, forming a polyphonic solo. Tyva throat singing was first recorded in 1865 and created a furor among European audiences. Currently, the technique appears Khoomei many artists and groups, one of the most famous – the group Huun-Huur-Tu.

Salty tea and feast of love. 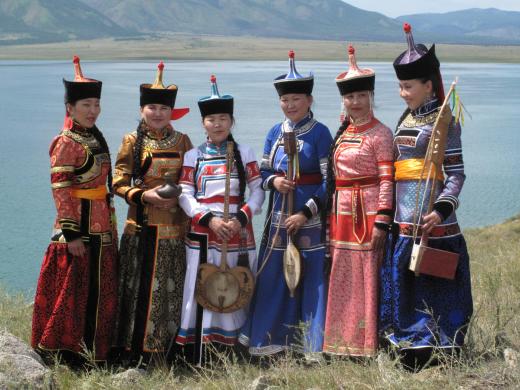 The first thing facing anyone came to Tuva – the local hospitality. Guests are sure to treat you with tea, and to the surprise tea inexperienced person would … salty! Yes, and with milk and butter. This traditional drink is made from the pressed green tea, it quenches thirst better in the heat and salt balance support. Furthermore, because of the addition of animal fat tea obtained very satisfying, it recuperate after hard work, and avoids cold colds.

Another strange custom Tuvinians described in his article, Soviet ethnographers Sevyan Weinstein. As in any traditional society, morals in Tuvan families were strict. But once a year during the holiday boys and girls were allowed to freely love each other. The young men took their ladies in the steppe and stuck at the selected location Uruk – long pole horse breeders. Pole warned afar that it – the territory of love. If children were born after the holiday, their adoptee girl’s family, and she could marry. The family of the man opposite was glad to have such a daughter-in-law, because it was already known that she can give birth to a healthy heir. In addition, Weinstein notes the interesting fact is that in traditional Tuvan culture was not kissing on the lips is all ours, Western influence.