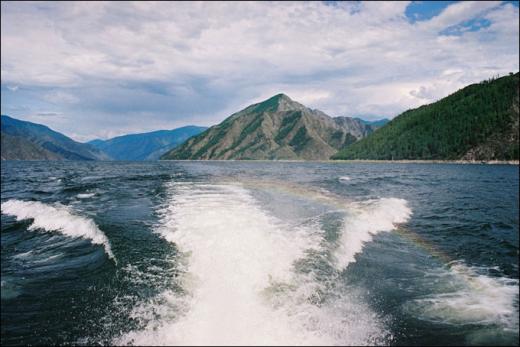 Yenisei – one of the largest rivers of the globe. Originates from two source: Big Yenisey. (Biy-Khem) and the Small Yenisei. (Ka-Khem). Flows into the Yenisei Gulf of the Kara sea. Biy-Khem, from the beginning, which usually calculate the length of the Yenisei starts minor river at the foot of peak Surveyors, on the Southwestern slopes of the Eastern Sayan mountains, at an altitude of 2380m. For 31км way to lake Kara-Balyk river falls on 800 m Length of the Yenisei river from the origins of Small 4102 km from the sources of the Large 4092 km from the confluence of the Small and the Big Yenisei.

Leaking almost strictly along the Meridian from South to North, Yenisei river divides the Russian territory approximately half-and-half. Its drainage basin consists of three different parts. In the upper reaches of the river is surrounded with mountains, and in the middle and lower reaches its channel serves as the border between the low-lying Western Siberia and the Middle-Siberian plateau. Kyzyl is located exactly in the middle of the Asian part of the continent of Eurasia. Here is an obelisk with the inscription: “Center of Asia”. In the Tuva basin, Yenisei river splits into many branches.

The Yenisei is the most abounding in Russia. Six hundred cubic kilometers of water a year makes it the Kara sea. It is three times more than the flow of the Volga river, and more than endure in the sea all the rivers of European Russia. Water consumption sometimes reaches 19800 cubic meters per second. Almost 625 cubic kilometers of fresh water brings Yenisei annually in the Arctic ocean. On the Yenisei built the most powerful in Eurasia hydroelectric Sayano-Shushenskaya and Krasnoyarskaya HPP. At the output of a hollow of the big river half a kilometer wide pierces through the Sayan mountains. No wonder the Tuvinians called this depression Khan-Ho-Khan (“Big bag with a small hole”). A high rocky ridge on the Western Sayan mountains leaves Yenisei only one narrow slit. Now the water from the mountains is built 200m. Sayansk hydroelectric power station dam, and the whole stormy plot of the upper Yenisei became a reservoir.

According to the structure of the valley and river channels, and the nature of the hydrological regime of the Yenisei river is divided into 3 main parts: the upper – from the confluence of the Big and the Small Yenisei in the territory of the Republic of Tuva to the exit of the limits of the Western Sayan mountains in the Minusinsk basin in the village is Specified, the length 474 km; middle – from Employment to merge with r. Angara, length 876 km and the bottom of the Angara river to the mouth, length 2137 km

During the first 188 km after the merger, the river flows under the name of the Upper Yenisei (Ulug-Khem) within the Northern edge of the Tuva river basin broken into the branches, the course of the teeming reefs, the width varies from 100 to 650 m; depth at pools 4-12 m, in the shallow waters of not more than 1 metre In place breakthrough Biy-Khem across the range of Lugging is the most dangerous on a river threshold – Khutinsky. Only with great difficulty experienced captains carried out through the court. Large threshold length of 320 m falling (at different levels) 2-6 m, speed the flow of 6-8 m/s (other thresholds of 3.5 to 4.5 m/sec).

From Sayanogorsk city, Yenisei river flowing on the territory of the Minusinskaya basin. The river valley is expanding in the mainstream, there are many Islands, and after the confluence of the left tributary of the river Abakan width of the valley becomes 5 km, riverbed more than 500 m, the rate of flow here is less than 2 m/s. Below the confluence of the river Abakan begins Krasnoyarsk reservoir (the length of 360 km), formed by a dam of the Krasnoyarsk hydroelectric power station near city Divnogorsk, in a place of crossing of the Yenisei spurs of the Eastern Sayan. The depth near the dam of about 100 meters Tributaries on this site fall right in the reservoir a – Tuba and Syda, below the dam Mans. Near Krasnoyarsk, where the river crosses the spurs of the Eastern Sayan mountains right Bank break near the river, picturesque rocks, the so-called “Krasnoyarsk pillars”.

Between Krasnoyarsk and the mouth of the Angara river valley expands, the river loses its mountainous nature, but in the mainstream, there are still underwater ridge is a continuation of the spurs of the Yenisei ridge.

Below the confluence of the Angara nature of the valley, and the bed of the Yenisei changes dramatically. Right Bank remains mountainous, the left becomes low, floodplain. If the above Angarsk arrow with a channel width of 800 m, below – not less than 2000 meters, the depth increases up to 10-17 m and the speed of the flow is reduced to 0.8-1.1 m/s. The width of the valley at the mouth of Nizhnyaya Tunguska river about 40 km, Dudinka and Ust-Port up to 150 km, riverbed 2500-5000 m; minimum depth of the whole lower Yenisei range from 5 to 8.5 M. Above the mouth of the river Podkamennaya Tunguska river again cuts through the offshoots of Yenisei ridge, forming Osinovski threshold. On the threshold of the depth of the fall to 2.5 m with current velocity of 2-3 m/s. Below the threshold river passes through the rocky gorge, the width of the channel here 740 m, and the depth increases to 60 meters Below the confluence of the Lower Tunguska prevail depth from 14 to 20 m below the Dudinka 20-25 m Mainstream broken into the branches, the island reach a length of 20 km From the mouth of the Kureika river, where already felt tidal fluctuations level begins estuarine plot of the Yenisei. Below the village of Ust-Port begins river Delta. Brehovski Islands channel is divided into numerous channels, of which there are four main branches: the Okhotsk, Stone, Big and Small; the total width of the riverbed here 50 km Below the river flows in one direction.

The value of the river transport.

The river is the most important waterway of the Krasnoyarsk region. Regular shipping is from Above to mouth (3013 km). The main cargo flows going from Krasnoyarsk to Dudinka. The main harbours and marinas: Abakan, Krasnoyarsk, Strelka, Maklakovo, Yeniseisk, Turukhansk, Igarka, Ust-Port. To Igarka rise marine vessels. With the creation of the Krasnoyarsk hydroelectric power station, the water route is divided into two isolated parts: in 1970 started the construction of the Elevator. In the Republic of Tuva on the Yenisei local shipping (main Marina Kyzyl). Of fish are found: sturgeon, herring, salmon, whitefish, sterlet, sturgeon, beluga.

Maximum depth.
Yenisei is rightly considered the deepest river in the country. Deep allow ships to climb the Yenisei almost 1,000 km For over 2000 km from the mouth of the Yenisei saves considerable depth, which ranges from 9 m onto the fairway (the area of the confluence of the river Angara) to 49 m in Guba. The maximum depths recorded on the holes of Osinovski rapids – 66 m and in the Delta – 65-70 m.

Maximum width.
To the mouth of the Angara river for almost 1400 km width of Yenisei not exceed 500-700 meters After the merger with Angara, which is almost 3 times wider than the Yenisei river, the width of the river immediately increases to 2.5 km. All subsequent inflows – Podkamennaya and lower Tunguska, Turuhan and Kureika – extend the direction of the Yenisei river up to 3-5 km But is especially wide Yenisei river estuarine zone, in the archipelago Brekhovskikh Islands, between which flow the four major transboundary river: Deryabinsky, Small, Big, and Stone Yenisei. Here its width reaches 75 km. For Brehovski Islands begins huge ples – Big crossing – width 35-40 km. Then Yenisei river narrows the Golchihy up to 5 km Behind Cape Volcanic Hag river leaves in the Yenisei Bay whose width in some places reaches 150 km.

Engineering structures.
Constructed in 1899 by mechanical engineer E.K. Knorre of the project Professor of the Moscow engineering College L.D. Proskuryakov bridge over the river at the world exhibition in Paris in 1900 he was awarded a gold medal for outstanding achievement engineering thought. The same award was the Eiffel tower.
In 1961, was commissioned in the communal bridge, the length of which is 2100 meters. But even more grandiose turned Oktyabrsky road bridge over the Yenisei, constructed in 1986. Width of 41 m, it has a length of more than five kilometers.

On the Yenisei river is Dudinka port, the port is included in the list of sea ports (up to 10) of the Russian Federation, which allowed the visits of ships and other floating objects with nuclear power installations and radiation sources.