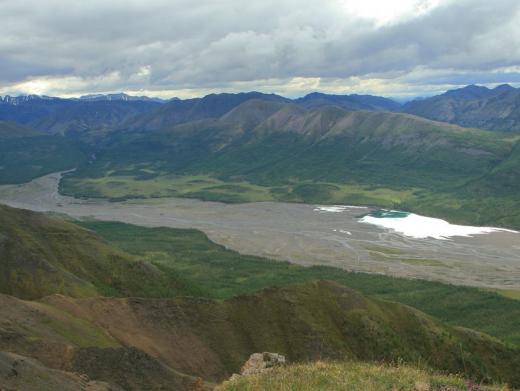 Aldan – river in the far East of Russia, the right tributary of the Lena river. Flows within Yakutia, the catchment area of the river, occupies the North-Western part of Khabarovsk Krai. Aldan is on the sixth place among the rivers of Russia by volume of runoff and is the largest tributary of the river on the territory of the country. The Aldan basin is located in the development zone of permafrost and shallow indigenous crystalline rocks. The river originates on the Northern slope of the Stanovoy range. Within the Aldan plateau flows in stony riverbed with many rapids. Between the mouths of ucur and May flows on a wide valley, further – intermountain plain. In the floodplain are numerous lakes. In the lower course of the Aldan is divided into a number of branches. 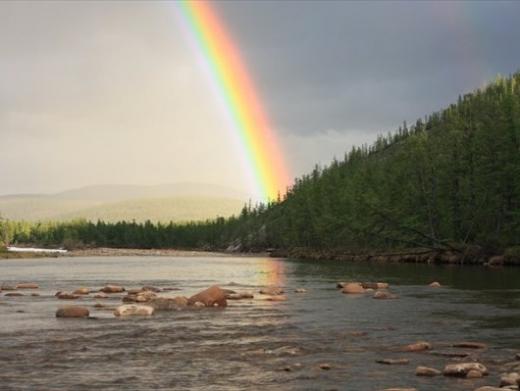 The river Aldan, which is the right tributary of the Lena river, is located in Eastern Siberia, Yakutia. Its total length is 89 kilometres, and the total area of the basin is equal to 729 thousand square kilometers. The river has its source at one of the Northern slopes of the Stanovoy range, at an altitude of about 1400 metres above sea level. Then the route goes along the ridge Zvereva, then turns North and North-East, along the Aldan plateau, and finally, the river makes a turn to the West and flows into the Lena about 160 kilometres below Yakutsk. Part way Aldan (between places tributaries flow into Uchur and May) flows through a wide valley, then on the plain between the mountains. In the lower reaches, not far from the mouth, the river divides into several branches. Aldan is one of the largest Siberian rivers. In some places the lower part of his width of up to 15 kilometers. The average annual water runoff varies from 5,000 up to 5,000 cubic meters per second. This is slightly less than one-third of the total flow of Lena. Most of the drainage is observed in the summer months, and the lowest in winter when the river is covered with ice. The average flow rate in the greater part of 1.3 – 1.4 m/S. In the Aldan flows 275 tributaries, the length of which exceeds 10 kilometers. Most of them are located on the right side. Largest of them – ochur (has the largest drainage), May, Tyre, Timpton. The most significant left-Bank tributaries – Amga (has the greatest length – 1462 km), Notara. In addition, within the basin Aldan have more than 51 thousand lakes. The largest of them, lake high Current, has a water surface area 82.6 sq.km. Usually Aldan freezes in the end of October, the opening of the ice cover occurs in early may. During the floods in may and June, the water level in the river rises from 7 to 10 meters. The main river is happening due to the melting of snow and rain. By its chemical composition of water in the river belongs to the category of hydro-carbonate-calcium, the maximum concentration of salts reaches 0.3 grams per liter. 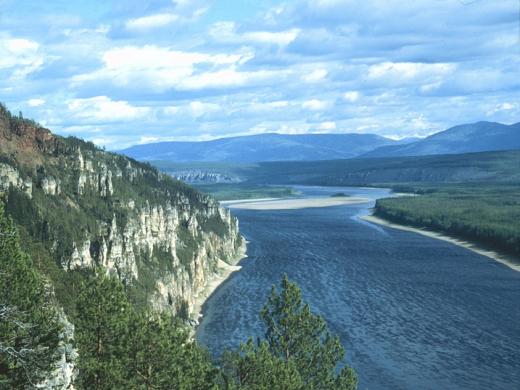 A large part of the Aldan navigable from its mouth up to the settlement Tommot. Navigation on the river lasts from June to October. Basic cargoes transported by water, are ores and ore concentrates, as well as industrial goods and food. In the river basin are numerous mining enterprises, processing ores of different metals. There are quite a large gold deposits, and also deposits of coal and mica. Aldan rich in fish resources. From valuable breeds it should be noted, first of all, sturgeon, white salmon, sturgeon and trout and burbot (the latter are found in the upper part of the river). The first known today, human settlements appeared in these places approximately 35-40 thousand years ago. Also known for numerous Parking later time – the era of the iron and bronze ages. In the early 17th century began to penetrate here first Russian explorers and settlers. It is along the Aldan they moved to the Amur and further East to the Pacific ocean. Currently there is a project of construction in Aldan basin hydropower cascade, consisting of 9 hydroelectric power station (South-Yakut cascade). However, the timing of its implementation is still unknown.

The fed by snow and rain. The high water occurs in may-July, when the water level rises at 7-10 m, while the consumption reaches 30-48 thousand m3/sec. Floods are also observed in August and September. Winter consumption is small (4%), in February-April, usually no more than 230?300 m2/sec. The freezing-over lasts about seven months, freezing begins in late October, opening in may. Water chemical composition is hydrocarbonate-calcium, the maximum content of dissolved salts to 0.3 g/l (in the winter low water period). Having a length of 2 273 km and a catchment area of 729 thousand km2, Aldan is the largest tributary of the Lena river, bringing it more than 30 % of its fall. Estimates of average annual water flow in the mouth in different sources differ and are usually specified within 5 000?5 200 m3/sec. For 58 years of observations at the hydrological station «Verkhoyansk ferry,» in 151 km from the estuary of the river Lena, annual water consumption was 5 245,85 m3/sec or in the mouth ?5 494,58 m3/sec. 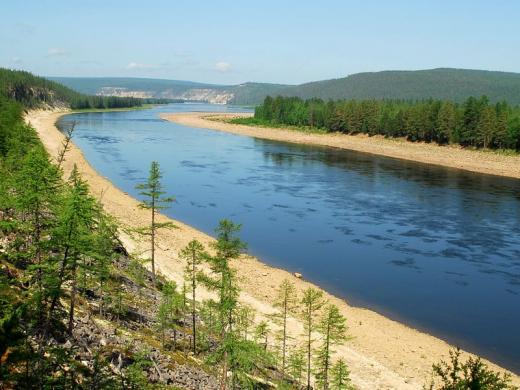 The largest tributaries are: the right – Timpton, Uchur, Tyre, May Allah-Jun, Tompo, Baray, TUMAR; left – Amga, Notara and Tatta. Only the river takes 275 tributaries of length more than 10 km of the Most affluent of them is the river ucur with the average flow rate in the mouth of 1 350 m3/sec. The largest catchment in the inflow of May – 171 000 km2. The longest tributary is Amga, which runs almost parallel to the Aldan from most of its upstream and has a length of 1 462 km This Amga has the smallest unit discharge among all other major tributaries – the average flow rate in the mouth is 178 m3/s, which corresponds to a unit discharge 2.57 l(s·km2). In Aldan basin has more than 114 thousand watercourses and over 51 thousand lakes. The largest of the lakes within the catchment area of the river – lake Big Toko.

Aldan shipping pier Tommot, is a vital water artery for the export of products of mining enterprises and bringing with Lena foodstuffs and industrial goods. The main jetty: Tommot, Ust-Maya, Khandyga, Eldikan. In the river basin are large deposits of gold, coal, mica. In Aldan basin is planned the construction of the South Yakutia hydropower cascade, on the river it is possible to construct Verkhnesaldinskoe HPP.