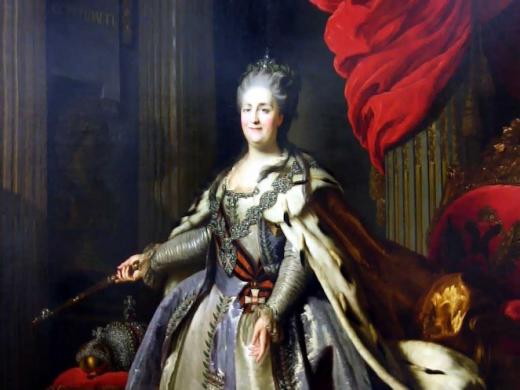 Catherine II was so sure that it will revive the Byzantine Empire that even a grandson named Constantine, and was preparing to give him power. Annexation of the Crimea was part of this ambitious project. 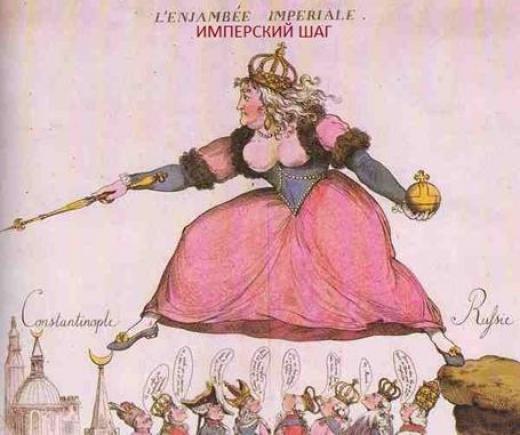 Fall of an Empire.

May 30, 1453 can be considered the date of closure of Byzantium. That same day, after two months of siege, Mehmed II entered Constantinople, and commanded to turn the symbol of Constantinople, St. Sophia Cathedral, into a mosque.

After this victory, the Sultan, who considers itself the successor of Emperor Constantine took the title Caesar of Rome. The fall of the holy city for the whole of Europe was the first sign of the beginning of the end of the world, the more so after this event began many of the plague, and the Turks were advancing farther west. Pope Pius II called a council, which introduced a draft Crusade to Constantinople, but the idea was never implemented.

Three hundred years later, echoing the designs of Pius II plan matured where this cannot be expected in Russia. The so-called Greek project is the result of discussions by Catherine II and her favorite Potemkin in 1780 because of the success of the Russo-Turkish war of 1768-1774, in particular, the protectorate of Crimea, obtaining the Northern shore of the Black sea and a solid contribution.

Of military success was Archipelago sea expedition, in which the Russian fleet for the first time fought far from the borders of Russia and was able to lay the beginning of the separation of Egypt from the Ottoman Empire. The main goal of this project becomes not only as the capital of the conquest of the entire Orthodox world – Constantinople. The Empress is so inspired by the idea that even named his grandson after Constantine – a name that wore the first and last emperors of Byzantium.

Grandson on the throne!

Dreaming of the Third Rome played a leading role in the politics of rapprochement with Vienna – Russian Empress in 1782 wrote to the Austrian Emperor Joseph II on its plans for the redistribution of Europe.

Catherine hopes that the Emperor “will not refuse to help me in the restoration of the ancient Greek monarchy on the ruins of the fallen barbarous government, are now dominant, while taking me on a commitment to maintain the independence of the restored monarchy of mine.”

Firstly, Catherine insists that Russia does not need new territories, but Moldavia, Wallachia and Bessarabia she chooses to combine into a single buffer state – Dacia, territorial concept which is practically a complete analog of modern Romania. Throne of the hypothetical state takes orthodox emperor to be in league with the great empires – the Russian and the Austrian.

Secondly, Russia and Austria should unite to defeat Porto and take Istanbul, again making it to Constantinople. As conceived by Catherine the reins had to take over her grandson Constantine, however reformed Byzantium would be completely independent.

One of the main reasons for the Greek project, the assurances of Catherine, was the fight against the infidels, but Joseph and the king of France, Louis XVI, not in a hurry to believe that plan.

Meanwhile, Catherine conducted an extensive correspondence with the French philosopher Voltaire, who urged the Empress that the “fall of the Ottoman Empire will be glorified in Greek, Athens will be one of your capitals, Greek language will be universal …”, and that only Catherine can “expel the barbarians and make Constantinople the capital of Russian Empire.”

Among the advice of Voltaire was a recommendation to use the capture of Constantinople by the chariot, which is clearly reminiscent of the heroic war of the Greek epic.

Louis supporting the Ottoman Empire after the Russian Union of proposals sent to Turkey for military training its army for war. Joseph also confused by the influence that Russia would acquire in the Balkans, besides, he did not agree with the concept of Dacia.

England also did not support the Greek project.

However, these arrangements were not the only steps to translate the revival of Byzantium – Empress, using the French war in America and an alliance with Austria decided to capture the Crimea as well as the costs of maintaining its independence, become exorbitant, besides, the peninsula would be a good link between the New Russia and Europe.

Conceived in 1778 by Potemkin in memory of the ancient Greek city of Kherson Chersonesos and its plan to build a Yekaterynoslav (now – Dnepropetrovsk), the future capital of New Russia, becoming one of the many moves in a big game on the accession of Catherine the land to the south.

One of the religious and moral motives to justify the annexation of the Crimea becomes the fact that Vladimir who baptized Rus, he was baptized is in the Chersonese, and in light of the need for the conquest of the Crimea is becoming something of a Christian duty.

While Versailles nourishes vague hopes to make a peacemaker in the war Ports and Russia, Catherine vengeance busy building fortifications on the Crimean Black Sea coast.

As the Russian army was already in the Crimea in 1782, the annexation was fast and Catherine suggested Tatars to swear allegiance to her or to go to Turkey (left 200, 000). New province called Tauridia and former Khan went to Kaluga pressure Prince Tauride – Potemkin engaged in the development of new lands.

The annexation of the Crimea, surprisingly, quite warmly welcomes both France and Austria. After the capture of the Crimea Russia establishes a protectorate over Georgia at the same time fierce fighting with the Chechens and Dagestani in the North Caucasus, moving everything to the south. Turkey refers to the states of Europe to ask for help, but no country meets her affection.

The result of emerging confrontation was the second Russian-Turkish war of 1787-1791, of which Russia emerged victorious: the border between the Russian Empire and Turkey began to pass on the Dniester River.

However, the Port received while Moldavia and Bessarabia. Gain from this war disappointment Catherine: the great project to revive the Byzantine Empire was never destined to become.

Despite the fact that soon will create a new sea port – Odessa, which inhabit the Greeks, and in the beginning of the XIX century, not long survive a Russian protectorate over the seven Greek islands, Catherine dreams of Constantinople and were only dreams.

Greeks, pleading for the return of the Empress of their homeland and left without if asked, and the only reminder of the grand project was Constantine, who speaks fluent Greek.