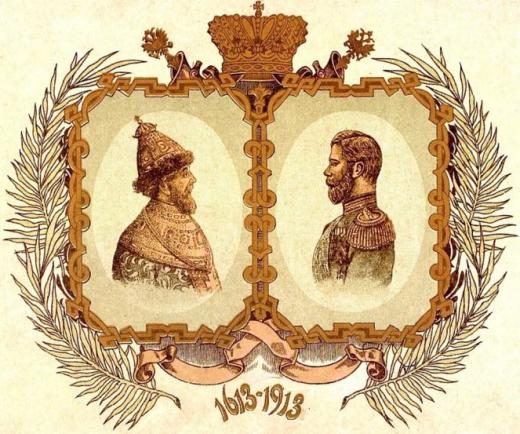 History of the Romanov dynasty can be read as a detective. At every step – their white spots. The origin of the dynasty, the story of the emblem and the circumstances of their accession to the throne all this still causes ambiguous interpretations of historians.

The ancestor of the Romanov dynasty assumed Boyar Andrew Mare at the court of Ivan Kalita and his son Simeon the Proud. We almost nothing is known about his life and origins. Chronicles mention it only once: in 1347 he was sent to Tver for the bride of the Grand Duke Simeon the Proud, the daughter of the prince of Tver Alexander Mikhailovich.

Caught in association with the new Russian state center in Moscow in the service of the Moscow branch of the princely dynasty, he so chose the “golden ticket” for himself and his family. There are numerous mentions of his descendants who became the ancestors of many noble Russian families: Stallion Semen (Lodygin, Konovnitsyn), Alexander Tree (Kolycheva) Gabriel Gavsha (Bobrykiny) Childless Basil Ventoux and Fedor Cat – the ancestor of the Romanovs, Sheremetevs, Yakovlev Goltyaevyh and Bezzubtsevyh. But the origin of the Mare is a mystery. According to legend, the family of the Romanovs, he led his lineage of the Prussian kings.

When a gap in the genealogies – it provides an opportunity for their falsification. In the case of noble birth is usually done either to legitimize their power, or to obtain extra privileges. As in this case. White spot in the genealogies of the Romanovs was filled in the XVII century under Peter I, the first King of Arms Russian Stepan Andreyevich Kolychev. New story consistent fashion even when Rurikovich “Prussian Legend”, which was designed to confirm the position of Moscow as successor of Byzantium. Since the origin of the Varangian Rurik did not fit into this ideology, the founder of the princely dynasty was a relative of the emperor Augustus. Following them, “rewrote” the history and the Romanovs.

The family legend, subsequently recorded in the “General armorial of the noble families of the Russian Empire”, States that in the year 305 ad Prussian king Protano gave the Kingdom to his brother Vaidevute, and he became the high priest of his pagan tribe in the city Romanov, where growing evergreen sacred oak.

Before his death Vedevut divided his Kingdom between twelve sons. One of them was Negron, whose family owned a part of modern Lithuania (Samogitia land). His descendants were brothers Russinger and the Gland Kabila, who was baptized in 1280 and 1283 Kabila came to Russia to serve the Moscow Prince Daniil Alexandrovich. After his baptism he was called Mare. 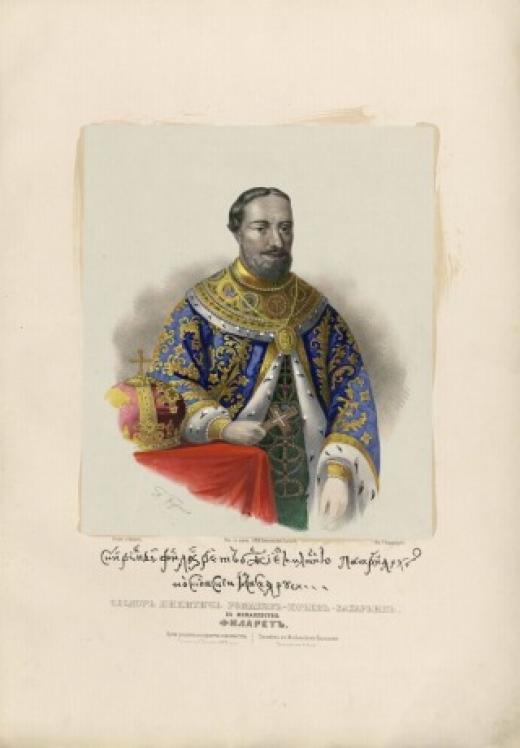 False Dmitry personality – one of the greatest mysteries of Russian history. Besides the insoluble question of the identity of the impostor, the problem remains of his “shadow” accomplices. According to one version, the conspiracy False Dmitry a hand Romanovs, who fell out of favor under Godunov and senior descendant of the Romanovs – Fedor, pretender to the throne, he was tonsured a monk.

Proponents of this version think that the Romanovs, Shuiskys and Galitsins dreaming about “Crown of Monomakh”, organized a conspiracy against Godunov, using the mysterious death of a young Tsarevich Dmitry. They prepared their contender for the royal throne, known to us as the False Dmitry, and led coup June 10, 1605. After, to deal with its most important competitor, themselves involved in the struggle for the throne. Later, after the accession of the Romanovs, their historians have done everything to link the massacre of his family Godunov False Dmitry exclusively with personality, and the hands of the Romanovs left clean. 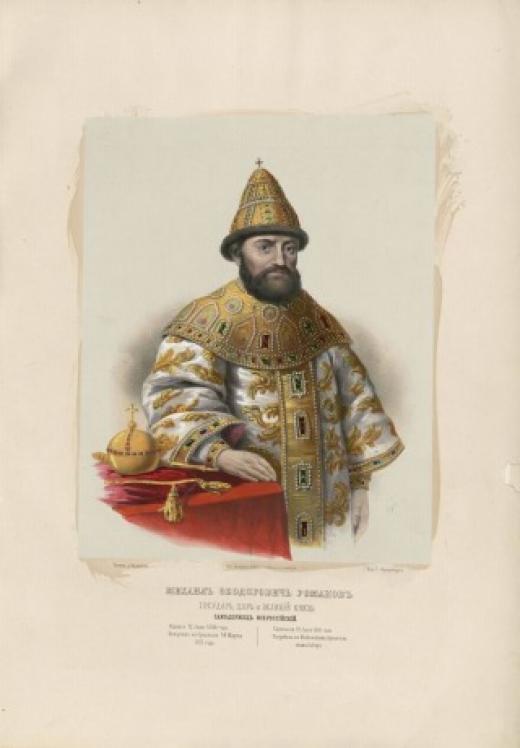 The election of Mikhail Romanov to reign was simply doomed to be covered with a thick layer of myths. How is it that in a country torn by civil strife to reign chose a young inexperienced young man, who at 16 years was neither military talent, no sharp political mind? Of course, the future king was influential father – Patriarch Filaret, who himself had once aspired to the imperial throne. But during the Zemsky Sobor he was a prisoner of the Poles, and hardly could somehow affect the process. According to the generally accepted version of the decisive role played by the Cossacks, who represented at that time a powerful force to be reckoned with. First, in False Dmitry II they were the Romanovs in one camp”, and secondly, they are certainly suited the young and inexperienced Prince, which was no danger to their liberties, have been handed down during the troubles.

Shout Cossacks forced adherents Pozharsky to offer to take a break in two weeks. During this time, started a broad campaign in favor of Michael. For many of the boyars, he also represents the ideal candidate, would allow them to keep the power in their hands. The main argument put forward was that the supposedly deceased king Fedor before his death wanted to pass the throne to his cousin Theodore Romanov (Patriarch Filaret). And as he languished in Polish captivity, the crown passed to his only son – Michael.

In the history of dynastic coat of arms of the Romanov white spots is not less than the very history of the dynasty. For some reason, a long time in the Romanovs did not have his coat of arms, they used the national emblem, depicting the two-headed eagle as personal. Their own family coat of arms was created only under Alexander II. By the time of the Russian nobility heraldry practical shape, and only the ruling dynasty did not have its own coat of arms. Inappropriate would say that the dynasty is not fueled much interest in heraldry, even when Alexis came “Royal titulary” – a manuscript containing portraits of Russian monarchs with coats of arms of the Russian lands.

In any event, this is just one of the many versions. It is not known why the ruling branch of the vast empire, which was related with noble houses of Europe, so persistently ignored orders heraldic, folding lids.

The long-awaited emergence own arms under Alexander II Romanov only added questions. For the execution of the Imperial order came from the king of arms of Baron B.V. Kene. The basis was taken prapor magistrates Nikita Ivanovich Romanov, at one time the main opposition leader Alexei Mikhailovich. Rather its description as the banner itself by the time it was lost. It was a golden griffin on a silver background with a little black eagle with raised wings and lion heads on the tail. Perhaps Nikita Romanov borrowed it in Livonia during the Livonian War.

The new coat of arms of the Romanov is a red griffin on a silver background, holding a golden sword and tharch topped with small eagle; black border on eight severed heads of lions; four gold and four silver. Firstly, it is striking to change the color of a griffin. Heraldry historians believe that Kene decided not to go against the established while the rules that prohibit placing a gold piece on silver background, with the exception of coats of arms of the highest personages as Pope of Rome. Thus, changing the color of a griffin he lowered the status of the coat of arms. Or played the role of “Livonia version”, according to which Kene put an emphasis on the origin of the emblem of Livonia, Livonia since the XVI century was the reverse combination stamp colors: silver griffin on a red background.

5 Peter III – the last of the Romanov dynasty?

As you know, kind of broke at the Romanov family Nikolay II. However, some believe that the last ruler of the Romanov dynasty was Peter III. The young emperor infantile quite an awkward relationship with his wife. Peter III harbored no feelings for his wife, preferring it to his mistress. But the son – Paul still born many years after marriage.

Rumors of illegitimate heirs uncommon in the history of the world dynasties, especially in turbulent time for the country. So here came the question: is it true Paul – son of Peter III? Or is he the son of the first favorite of Catherine, Sergei Saltykov.

The essential argument in favor of these rumors was that the imperial couple for many years had no children. Therefore, many believed that this union altogether fruitless, hinting at the Empress, mentioning in his memoirs that her husband was suffering from phimosis.

Origin of Paul still remains an unsolved mystery that troubled and subsequent generations of the Romanovs. Unsurprisingly, otherwise it turned out that the Romanov dynasty was interrupted by another of Peter III, and subsequent monarchs on the throne is not more than usurpers. And yet, in justification of Catherine the Great, it is worth saying that the similarity of portraits of Paul and Peter III is obvious.