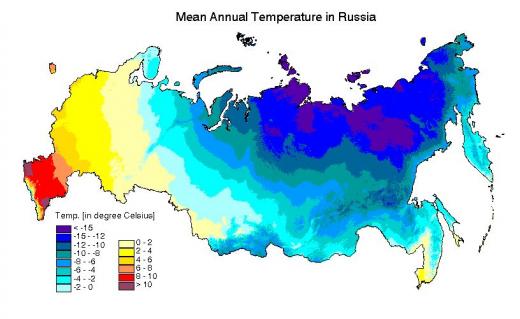 John Etty examines how far history has been moulded by enviroment,

Modern textbooks on Russian history often include an introductory chapter on the country’s climate and natural geography. Writers, it seems, believe Russia’s physical environment is either so significant or so widely misunderstood that students must receive an explicit description. Natural geography and climate are not always important in a region’s history, however, and it is possible to overstate the impact that Russia’s geography has had on its history. The winter defeats of Napoleon and Hitler, for instance, were more than just seasonal coincidences. Nevertheless, the nature of Russia’s physical environment has undoubtedly had a significant impact on its history in recent centuries.

Though Russia is now smaller (at 17,000,000 square miles) than both the Tsarist Empire before 1917 and the USSR in 1945-1991 (both around 22,400,000 square miles), since the expansion of Muscovy and the days of Ivan IV, the first ‘Tsar of All the Russians’, Russia has always been among the world’s largest nations. Russia is presently the largest country in the world – almost twice as big as the next largest, Canada, and 70 times larger than the UK – and its size has always been the basis of its colossal potential strength.

Yet in fact Russia’s size created certain significant weaknesses. Governing large countries is still problematic in the age of instant mass communication, but Russian government developed at a time (under Peter the Great, 1689-1725) when there was little alternative to centralised authority. Poor roads, no railways and unfavourable climate meant that mid-seventeenth century Russian messengers could expect to travel a maximum of 50 miles in 24 hours. Delivery of messages to and from the empire’s extremities could thus take many days. Even improving communications did not alter Russian autocracy. In 1900 Italy and France spent more than twice as much per capita as Russia on policing the empire, and Russia possessed only four state officials for every 1,000 inhabitants. Lacking a network of state control, the government became reliant upon the Orthodox Church’s infrastructure.

Russia’s size and the length of her borders (nearly 40,000 miles today), combined with the difficulty of governing this huge area, has created many problems for its rulers. Despite the awkwardness of local control in a centralised system, Russia has never tolerated problems on its margins. Russification of non-Russians was attempted in the nineteenth century to avoid problems at the edge of the empire, notably in Poland, but the army has also often been used to strengthen, maintain or re-take control. Between 1883 and 1903 Russian troops were used almost 1,500 times to suppress local unrest. Given that Russia’s European land borders are strategically weak and lack natural defences, foreign attacks have come surprisingly infrequently. Nonetheless, border disputes brought war with Turkey (1853-6 and 1877-8) and Japan (1904-5). Soviet troops were used in Hungary in 1956 and Prague in 1968. Indeed Russia today remains a jealous guardian of control in Chechnya.

Russia’s size and location have decided its strategic outlook since the Middle Ages. It inhabits land on two continents (European Russia being divided from Asia by the Ural Mountains), but since the reign of Peter the Great Russia’s outlook has predominantly been westward. Thereafter Russians expanded south and east, first in search of furs and later as suitable agricultural land ran short. From around 1600 onwards, Russia’s frontiers expanded north, to the east and west, largely unopposed, though wars against Sweden and Napoleon, for example, added small but significant territories to the empire. Despite her westerly stance, Russia has generally held an ambiguous attitude towards Europe. In the nineteenth century, Russian Slavophiles prized Orthodoxy as just one example of Russian superiority. Despite this, Russian rulers from Peter the Great through to Josef Stalin and Mikhail Gorbachev have all looked to the West for inspiration, example or justification. This is perhaps due to Russia’s location on the north-eastern edge of Europe.

Remoteness ensured that Russia’s government was not tempered by a European-style renaissance or a religious reformation in the early modern period. Russia was close enough to the industrial revolution to appreciate massive European developments, but sufficiently distant to question whether such change would be suitable for, or welcome in, Russia. Alexander III (1881-1894) and Nicholas II (1894-1917) allowed some limited industrial modernisation in Russia, but they attempted to create a permeable barrier along Russia’s European frontiers which could filter out the damaging westernising side-effects of these changes. Failure to achieve this contributed to the decline of the tsars’ power and the spread of revolutionary activity.

Russia is lavishly endowed with natural resources, but industrial development was hindered until the twentieth century by their Siberian inaccessibility. Russia now produces 20 per cent of the world’s natural gas, and oil is also a valuable commodity. Russia is self-sufficient in all major industrial raw materials, and contains reserves of less essential, but nevertheless significant, natural resources, including diamonds and gold.

Russia is less generously furnished with suitable agricultural areas. The country can be divided roughly into three main zones.

The tundra, or permafrost, is found north of the Arctic Circle, and cannot support human life. It is too cold for trees since the subsoil is permanently frozen, sometimes to a depth of several hundred metres. Mosses, lichens and low shrubs are the only natural vegetation. Land hunger drove peasants into these areas, and the Soviet industrial and prison camp enterprises also attracted workers.

Russia’s taiga (20 per cent of European Russia) represents nearly a quarter of the world’s total forested area. The taiga itself can be sub-divided by soil and vegetation, but it graduates from needle-leaved trees and permafrost in the north to broad-leaved trees in the south. The soil in this southern zone is boggy, marshy and lacking natural plant food.

The steppe is a huge plain stretching from Hungary to Mongolia, totalling a quarter of a billion acres. The soil – called black-earth because of its dark colour – is one of the world’s most productive. No trees grow here unless planted, and only brush and grass occur naturally. This region is the heart of Russia’s agriculture.

The development of international trade and naval warfare led Russia to the realisation in the seventeenth century that it was significantly disadvantaged since its mainland was served by only one ice-free port (Russia’s average annual temperature is -5.5ºC). Russia contains all of the world’s vegetation zones except a tropical rain forest. Its size means that it has a continental climate. The coldest weather is experienced in the north and east, yet summer weather patterns mean that Verkhoyansk in Siberia has the earth’s widest temperature range, with a record low of -68ºC and a record high of 37ºC!

The Effects of Russia’s Geography and Climate

Russia’s geography and climate hindered her development through the nineteenth century, at a time when the rest of Europe was modernising. The country was unlikely to experience a European-style agrarian revolution, and thus it would have been almost impossible for Russia to undergo a spontaneous industrial revolution. Agriculture was too precarious.

Perversely, the regions worst suited to agriculture receive the highest levels of rainfall. Whereas precipitation in Western Europe is distributed evenly through the year, July and August tend to deliver around 25 per cent of annual rain in European Russia. In the 1800s, in the south and west, Russia’s most productive soil regions, rainfall patterns (droughts in early summer and/or downpours around harvest time) conspired to ruin one harvest in three.

Even when the harvest was good, yields were poor compared with the rest of Europe. By the nineteenth century, Russian yields (the number of grains harvested for every one sown) had barely increased since the Middle Ages, while average Western European yields had increased by four and a half times. A major reason for this was that farmers simply did not attempt to improve production. Communications were so poor that any potential market in a city was too far away for individual farmers to supply. Farming was so difficult that many Russians viewed it as something to escape from.

Even after the 1861 Emancipation, Russia’s peasant farmers felt no inclination to seek better results. The peasant’s commune or mir (the word also means ‘universe’) taught him all he needed to work his land. His only other source of knowledge (peasants were usually illiterate) was the Church, which, stultified with superstitious beliefs about the natural world, ensured that any wisdom about improving agricultural practices would have been rejected or ignored. Added to this, the unpredictability of weather patterns and the lack of a financial incentive meant that Russia’s farmers did not spend time, money or effort trying to increase production.

Russia’s short growing season (six months on the steppe, compared with around nine months in Western Europe) means that agricultural activity must be an extremely intensive burst of work in the warmer months which might, or might not, pay off at harvest time. Russian peasant farmers knew that the only way to complete all the necessary work in the time available was to pool labour. (This basic knowledge was part of the ideology behind Stalin’s hated collectivisation programme of the 1930s.) By necessity, therefore, peasant families grew to include several generations living and working together.

Fertilising the soil could have improved peasants’ yields significantly. However, long snowy winters and frequent food shortages made it difficult to keep livestock healthy. A lack of manure, and slow decomposition in Russia’s cold climate, meant that land recovered very slowly. The simplest way to find fertile soil was to look for virgin land. The total area being farmed increased from 197 to 317 million acres between 1809 and 1887, with new farms developing in the north and east. Here the land was less fertile and larger farms were needed to produce the same unreliable results. The population was increasing significantly (from 45.6 million in 1800 to 125 million by 1901, for example), and this, combined with ‘land hunger’, created mass dissatisfaction. Later tsarist policies tended to make it harder for peasants to leave their mir and, as families grew in size, many peasants found themselves farming plots which were simply too small to feed them adequately.

Without an agricultural surplus first, Russia could never have supported a ‘natural’ industrial revolution, as Britain did. Stalin’s drive to modernise with the first two Five Year Plans (1928-33 and 1933-37) and the forced collectivisation of the 1930s succeeded in transforming the USSR into an industrialised nation, but these policies were driven by the Soviet government. Thereafter, the USSR seemed able to conquer Russia’s natural geography and climate and build cities where humans had never lived before. It took a colossal and painful effort, though, for the Soviet people to overcome Russia’s natural obstacles to modernisation.

Russia’s geography and climate have undoubtedly caused problems for the state in recent centuries; but these issues, as well as the dramatic scale of the modernising operation before the Great Patriotic War, or the shocking brutality of the war itself, can distract the student’s attention from the hardships which the country’s physical environment inflicted upon individuals. The major consequence of Russia’s geography and climate has always been very simple, yet very significant.

In 1891-2, a famine occurred in an area of around 900,000 square miles in the fertile areas around the River Volga. It affected between 14 and 20 million people, and killed an estimated 400,000. Though many of these casualties occurred as a result of disease, a study of this famine (and of many others in Russian history) leads the historian to an inescapable conclusion. Any study of the geography and climate of Russia through its recent incarnations reminds Western students of a kind of distress which they will probably never experience. It is important to realise and to remember that, because of natural geography and climate, Russia’s people have struggled to feed themselves adequately. This kind of perpetual, fundamental concern for such a large proportion of the country’s population is perhaps one explanation why Russia’s rulers have found it relatively easy to exert such strict control over their people.