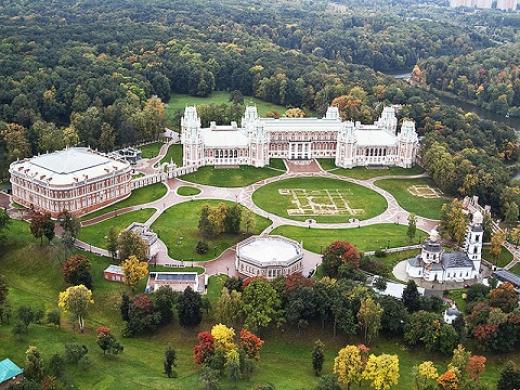 Moscow Tsaritsyno Estate Museum is located in the southern part of the capital and is a specially protected areas. This is one of the most mysterious and beautiful places in Moscow, which includes a huge landscaped park, scenic Tsaritsyno ponds and magnificent palace and park ensemble. It is the largest museum-reserve in Moscow, with an area of ​​550 hectares.

History of the Museum-Reserve Tsaritsyno.

In 1984, on the lands of the Tsaritsyno Park was organized by the State Museum of Applied Arts of the USSR. Built ensemble Tsaritsyno actively restored in the 80s, and in 1993 he was awarded the status of the Museum-Reserve, which soon entered the list of historical and cultural monuments of federal significance. Second Cavalry Corps was the place where in 1994 the first exhibition was presented. In 1996 he opened the Middle Palace (Opera House) and the Petit Palais. In subsequent years, were restored and other buildings of the ensemble. In 2005, the Tsaritsyno palace complex became the property of the city, it was then that a group of landscape architects, headed by M.R. Morina, began restoration work. Were restored pavilions and buildings recreated dams and ponds, established garden sculpture, as well as open in the capital of the largest light-dynamic fountain. In September 2007, opened after reconstruction Big Tsaritsyno Palace, which today is a museum and exhibition center. Currently, work is continuing on the improvement.

Construction of the estate began in 1775, when Catherine II commissioned the architect V.I. Bazhenov built near Moscow, in the estate “black mud”, the royal residence, which soon became known as the Tsaritsyno. Architect departed from the classical style, and built a single composition, the hallmark of which was a picturesque asymmetry of different buildings. As soon as the royal court moved to St. Petersburg, the money allocated for the creation of the estate stopped, significantly slowed the process of construction. Palace housing estates built by Bazhenov, began to deteriorate.

Ten years have passed, and Catherine commissioned the construction of the Palace M. Kazakov. The Palace of the Governor-Sergei Bozhenov was destroyed, but Kazakov retained much of its project, which created a kind of “compromise” option, which combines the classic space-planning structure of a Palace and Gothic decoration. Today analog Tsaritsyno palace does not exist – it is the only one in the palace complex in Europe, built in the style of “Russian Gothic” or “pseudo”. However, Catherine’s dream never to be fulfilled: the palace of her life was not built until the end. In 1797, after her death, the construction stopped. Only in the 21st century ensemble itself Palace have been restored.

V.I. Bazhenov also worked on the creation of the Small Palace and the Opera House. Small Palace is the smallest of the three imperial palaces. It is called the semi-circular, because it is located on top of a small semi-circular area. Middle Palace is between the Curly gate and the Small Palace that lead into the Park. The Opera house it was called in 1804, when did the idea of making it musical evenings and concerts. Bread yard, also known as the Kitchen building was used for storage of products. Rooms for servants, pantries and kitchens were supposed to be here. Its construction began in 1784, however, has not been completed.

Until now remained gallery Milovic with columns of the Tuscan order. It was built by the architect IV Gotovim in 1804. A year later he erected a Temple of Ceres (the Golden sheaf) – eight-columned gazebo in the center of which stands the statue of Ceres, Roman goddess of fertility. Mermaid gates installed on the southern island of Tsaritsyn upper pond. From there, a stunning view of the pavilion Nerastankino also built Egotov. The Church Mother Of God dates back to the year 1722, it was built on the site of a wooden Church. Separately located baptismal hut.

Amazing landscape park early 19th century stretched near the palace ensemble. The largest in the capital of a cascade of ponds form Tsaritsyn, Borisov and Shipilovsky ponds. Operates stables. Sports facilities, rings, ropes, horizontal bars and slides are available on the other side of the pond. In addition, the park has a boat station, benches and footpaths.

Grand Palace – the main building of the complex Tsaritsyn. It permanent exposition, which tells the story of the Tsaritsyno park and manor houses, archaeological finds discovered in the complex, as well as the Empress Catherine II. Confectionary art works are presented in the Bread House – they mimic dishes imperial era. Are frequent concerts of various musical groups, which are held in the atrium of the Bread House. Tsaritsyno Estate Museum is engaged in educational and research activities. Educational sessions are available for students of middle and younger can join the Cavalry School.
The museum Tsaritsyno is not only beautiful buildings and parks with a rich history, but also a favorite vacation spot guests and Muscovites themselves.