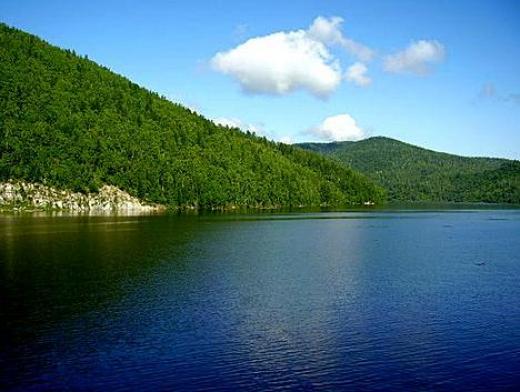 Zeya reservoir – dam on the Zeya River in the Amur region of Russia. Zeya hydroelectric station dam formed in 1974-1980, respectively. Reservoir extends upstream from the Zeya hydroelectric dam in Zeya, over a length of 40 kilometers within Tukuringra ridge is a narrow body of water with the bay, which formed at the confluence of the tributaries of the Zeya and upstream within Verhnezeis basin, becomes a body of water. Baikal-Amur Mainline runs along the north coast of the water reservoir and crosses the bay in 1100 meter bridge near the village of Bomnak. Reservoir is used for navigation and fishing (whitefish, trout, pike, Amur catfish, sturgeon and grayling).

The area of the Zeya reservoir – 2419 sq. km, complete, and usable capacity of reservoir – 68,42 and 38,26 cubm When creating Zeya reservoir was flooded 3.9 thousand hectares of farmland. In the area flooded by the reservoir, was 14 settlements, inhabited by 4 460 people who were resettled in the newly built and moved towns. Zeya reservoir, volume of water takes 3rd place in Russia, after the common (169,3 km3) and Krasnoyarsk (73,3 km3) of water. Is the source for water supply of the greater part of the city. Reservoir formed recently (about 35 years ago) and biological decay of the upper organic layer of the earth is still ongoing, as evidenced by the dark brown color of the water. This process has stabilized, but noticeable water purification can be expected only in 20-30 years. Water in its composition with low mineral content and high content of biogenic and organic substances.

Before the flooding of the reservoir is not fully implemented lesoochistka. The remaining forest slowly decomposes to form phenols. Hydroelectric dam built without rybopodёmnikov, resulting in a natural way barred the passage of fish on the spawning grounds. In addition, the negative impact on fish produce significant, up to 8 meters, the fluctuations of the reservoir level. Lack of shared sudopodёmnikov navigation on two non-communicating portion on the bottom and the upper reach. Zeya River below the dam does not freeze over 80-100 km. Therefore, in the winter time in this interval river transport links broken the ice between settlements. In winter along the ice-free portion of the river is worth a dense fog that has an impact on the health of people in the area. Due to late frost reservoir (December), autumn can be warm, long, cold softened.