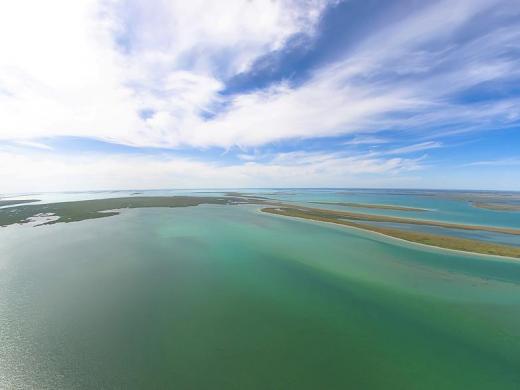 The Chany lake – closed salt lake in Russia, located in Barabinsk lowland on the territory of the Novosibirsk region, the largest lake in Western Siberia. The lake is located on the territory of five districts of the Novosibirsk region: Sivinskogo, Barabinsk, Janovskeho, Kopynskoho and Chistoozernoe. It got its name from the word Chan (Turkic) is the vessel of the big sizes. The Chany lake is located at the altitude is 106 meters above sea level. The lake has 91 km, 88 kilometers in width. The lake area is variable and currently, according to different estimations makes from 1400 to 2000 km2. Average depth of about 2 metres. The basin of the lake is flat. The lake is shallow with depths of up to 2 meters account for 60 % of the total lake area. The lake shore is low and highly rugged, overgrown with reeds, the reeds, sedge and bushes. The bottom is sandy and muddy. The maximum recorded temperature of water in summer is 28,3 C. a Large part of the lake located in the forest-steppe natural zone. 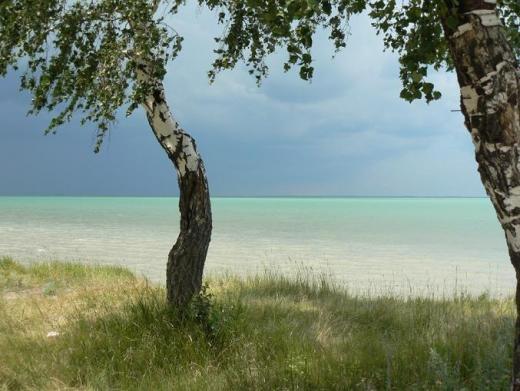 On a lake about 70 Islands, the largest are Amelkina Mane, Shundikov, Lean, Bear, Cap, Chinaaa, bird-cherry, Rare. Island Cheremushkin, Mare, Perekupnoy, Bekarev, guelder rose, Chinaaa, Sipiagin, Round, Kolotov, Kamyshnyi are natural monuments in the region, because they contain unique landscape, which is the habitat of rare species of plants and animals. Among the largest peninsulas – Zelenchuk, Kondakov, Naked, waskin, Cape, Travnikov, Rodyushkin, Kvashnina, Malinina, Dark, Tyumen. The Islands and the Peninsula of the lake have a characteristic feature of most of them stretched from South-West to North-East. Their specific location due to the fact that they represent a half-mane. The salted lake, in the South-Eastern part of the lake salinity below. The power of the lake mainly snow, lake fed by rivers Kargat and the Chulym river (flows into Small Tanks). Earlier in the lake flowed the river Sarika, connecting it with lake Sartlan. Average annual total flow of the river Chulym and Kargat not very significant and is 0,44 km3, while drains are very IZMENChIVOSTI Vats is a unique reservoir of Western Siberia. The maximum value of the total flow was achieved in 1948 – 1,72 km3, the minimum – in 1968, when it was 0,013 km3. The inflow of water has a tendency to decrease due to the many dams built on recasa connected with channels with more fresh Small lakes Chany and Arcul. The lake is a system of pools connected by canals and shallow water zones, of which the largest three: Kireichenko, Tagana-Kazantsevo and Yarkovsky different mineralization of water, space, water, soils, prey base . Freezes in the second half of October to the first half of November, opened in may. On the lake there is a local shipping.

The Chany lake is inhabited by 16 species of fish. The most numerous: silver carp, perch, carp, IDE, pike-perch. The average number have roach, pike, bream. Small species – Golden carp, Peled, eel, tench, lake minnow, gudgeon, verkhovka. Main place of wintering of fish – Jarkovsky ples and lake Arcul. The most numerous fish in Harkovskom ples – perch. In summer Kireichenko ples in a significant number inhabited by all basic kinds of fish fauna in Tagana-Kazantsevo the reach of the common species are IDE, pike, carp, crucian, a smaller number of roach and perch. In dry years the winter Zamora cause enormous damage in fish populations, especially valuable commercial species. In dry periods killed a large number of eggs and young, so the fish tank is required. The lake regularly serebryatsya, it holds the commercial cultivation of fish. First fish-breeding work in the lake began in 1926 – 1927. Originally were acclimatized carp, carp, bream. Later was conducted acclimatization Sudak, Peled, tench, nelma, muksun, Baikal omul, when the stocking of the lake accidentally universe verkhovka. The first attempts of acclimatization great success is not achieved, increasing catches were observed. Further acclimatization perch was successful, and he reached great numbers. The bulk of bream dies in dry years when Zamora, so its population has not yet reached the commercial level. At present reliable information about the presence of the lake Baikal omul and nelma not. The failure of the omul is explained by the fact that the lake for this type of fish is shallow. Acclimatization Peled failed because of the high salinity of the water, and at the present time commercial cultivation of Peled, when the larvae grown in fish farms, are released into the lake, and fish grow to commercial size. In addition, many larvae omul, muksun, Peled and nelma was eaten perch, roach and IDE. 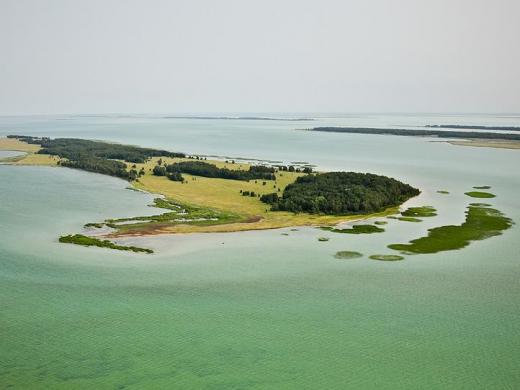 In 1976 on the river Chulym was built fish hatchery “Urumqi”, including those engaged in growing and stocking of the lake Chany the young of carp. Active stocking juveniles weighing 25 – 80 grams led to the fact that the lake has been formed by numerous self-reproducing population of carp. According to the observations of the Novosibirsk branch of “Sibribniiproekt” in 1993 carp on the number of juveniles appearing ahead of native species of fish, roach, IDE and perch. The economic crisis of the 1990-s led to the fact that the scale stocking lakes kennel has significantly decreased.

Fish stocks are now in comparison with the nineteenth century much drooped. For the first time reduction in the catch of pike, carp and perch was registered at the end of the XIX century: “… the first was full of fish, in it there were pikes to pood weight, carp and perch from 5 to 7 – 8 F. Now, for unknown reasons, fish his wealth emaciation and the fish were crushed”. In XX century in periods of high water levels in fish catches reached 10 thousand tons per year in dry years was reduced up to 200 tons per year. In dry periods the basis of commercial catches occupy low-value fish species. Among the main reasons for the reduction of catches are named the following: the Decline and sharp fluctuations in water level. Winter kills. Freezing to the bottom of a significant part (up to 25 %) of the lake in winter. Reducing stocking. Anthropogenic impact. In the lake officially permitted fishing nets at the purchase of the corresponding license. The established quota on catching the fish is 2800 tons per year. Ichthyologists believe the actual catches are much higher than the official statistics, in addition, in recent years on a large scale is poaching. Increasing concentrations of phenols, oil products, nitrogen compounds and other substances. High mineralization of water in the lake. The most saline water noted in Kireichenko (6 g/dm3) and Harkovskom (2.5 g/dm3) reaches. At the end of XX century the lake has got the form of the goldfish called Amur carp. Amur carp for several years a rapidly multiplied, virtually ousted from the lake did not bear with it competition Golden carp, and currently ranks first in catches. Part of the population perch infected Gill tick. Opisthorchiasis in fish lake Chany reported so far. 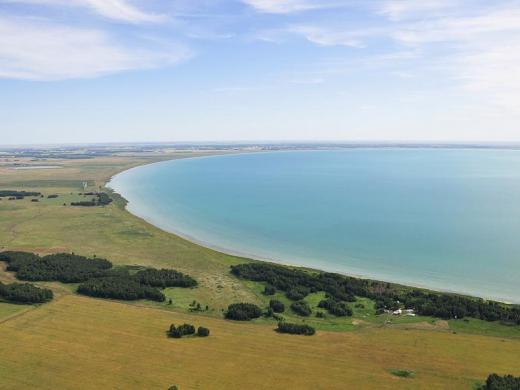 The lake plays an important role in the migration of many species of water birds: ducks, gulls, geese, waders, swans, terns, coots, mountain duck. Out of the rare species of birds on lake marked white-headed duck, red-breasted goose, Asian Dowitcher, sociable lapwing, Avocet, black-winged stilt, great black-headed gull, Caspian tern, steppe circosta, Golden eagle, white-tailed eagles, Dalmatian Pelican. On the lake there are significant aggregations of waterfowl in periods of migration and molting. During migration and nesting on the lake is up to 220 species of birds, according to other data – up to 300 species of birds. In the 1970-ies estimates ornithologists on the lake for the season used to 1.5 million waterfowl. During the XX century has been a steady decline in the number of waterfowl because of mass destruction. For example, in 1930 in the system Chanovsky lakes were collected 9 million eggs and many more damaged. At the beginning of the XXI century the main anthropogenic factors that reduce the number of birds were the destruction of nests during grazing in the coastal part of the lake, bird mortality in fishing nets.

From mammals inhabit the lake muskrat, in the forest-steppe lands, timed to the lake, inhabited by foxes, hares, ROE deer, badgers, foxes, weasels. The lake is rich in plankton, as zooplankton and phytoplankton. According to the data of 1983 are found in the lake 404 species of algae. In Kireichenko ples noted the high biomass of algae, strong development of phytoplankton has a negative impact on the abundance of fish. Species diversity of zoobenthos small, dominated by midges, also there are shellfish, caddisflies, KOLIZEY, gammarids, oligochaetes, dragonflies, mayflies. On the banks and Islands of the lake grow birch, cherry, cranberry, aspen, hawthorn, dogrose, currant, raspberry, fern. In 1940-ies on the Northern shore of the lake were planted with oak and pine forest. On some Islands, for example, on the island Skorecki grow and flower wild peonies.