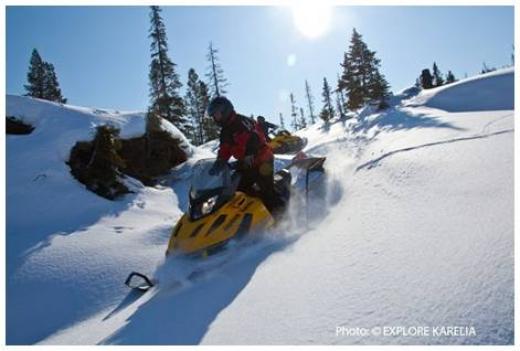 Landscape diversity of Karelia contributes to the creation of routes of different levels of complexity: the snowmobile trails are on snow-covered forests and covered with solid ice lakes, hills and rural streets. In addition, snowmobile tours in Karelia is, as a rule, not just skiing, but also a rich educational program. And good infrastructure – modern recreation and presenting the achievements of civilization cottages – makes a comfortable rest of tourists.

Snowmobile tours in Karelia will start in December. However, we are talking primarily about the «continental» voyages. Ice Safari starts not before, like water surface completely freezes – at the end of January-February.

What are the snowmobile tours in Karelia? The majority of two-three-day routes for beginners or people with minimal experience to drive a snowmobile. Among such tours trip to the zoo, where the cages live representatives of fauna of the Karelian forests, and in the traditional village of Rubcheila, where tourists acts as a local folk group, followed by tasting national cuisine dishes.

In recent years in Karelia in demand and Christmas tours on snowmobiles. In South Karelia is a three-day journey, which do not differ intricate program of skiing and successfully combines excursions, leisure and meeting of New year. North Karelia invites the longer Christmas tours. A week stay near the White sea will be remembered by the Stresa Snowmobiling in the winter fishing. In the first days of the new year holidays 2013 tourists will have the opportunity to compare experiences from Snowmobiling in the white sea Karelia and Kola Peninsula: for those willing planned a day trip on a snowmobile Safari in Khibiny mountains.

And most of the tourists coming to snowmobile tours in Karelia, to be in the «off-season» at the world famous Karelian Islands of Kizhi island in lake Onega and Valaam in Ladoga. In the absence of numerous noisy groups of tourists arriving in the summer, boats, on the Islands there is a special atmosphere of ancient times, serenity and seclusion – all of which is tired of the bustle and traffic jams resident of cities.

Kizhi island is known Museum of wooden architecture, the most valuable exhibit which is the ensemble of the Kizhi wooden Pogost – is a listed world heritage site. Snowmobile tour through the Museum turns out pretty fast, this is used by tour operators who organize a two-day snowmobile tours to Kizhi. However, it is better to go to Kizhi in a three-day tour: the second day of the trip is completely devoted to study of Zaonezhye, as the Kizhi island and its surroundings, rich with interesting monuments of history and architecture. Snowmobile tours on Kizhi island can be easily called the most popular tours on snowmobiles in Karelia!

The road to Valaam snowmobile opens every year: Ladoga lake rises long and reluctantly. Developed snowmobile tours to Valaam varying durations. Experienced tourists can travel to the island one day and meet with the Central manor of the Spaso-Preobrazhensky monastery. Multi-day tours on snowmobiles to Valaam interested in the possibility of a higher number of attractions, including remote monasteries. A kind of «trick» of snowmobile tours to the island of Valaam is accommodation in a former monastery hotel, very close to a monastery. Those who are able to see the harsh winter beauty of the island of Valaam and the difficult life of the brethren of the monastery located on the island monastery, remain with strong impressions.

It is worth mentioning the snowmobile tours in Kalevala region of Karelia. This Northern district bordering Finland, and is known as the birthplace of the epos «Kalevala». Today it is the centre of active rest and tourism. Here organize day ethno-Safari on the nearest villages of Vuokkiniemi and farm Haikola. Ethnographic tours on snowmobiles in Karelia exciting opportunity to visit the region where for centuries formed traditions, culture and everyday life of Karelians, gaining national identity and unique colour. During snowmobile tours you can see old houses and household buildings, churches, visit exhibition of folk arts.

In Karelia anyone can pick up snowmobile tour, and thanks to the hospitality of the locals, who are waiting for tourists with overheated steam room and delicious treats, even a two-day trip turns into the most complete rest!