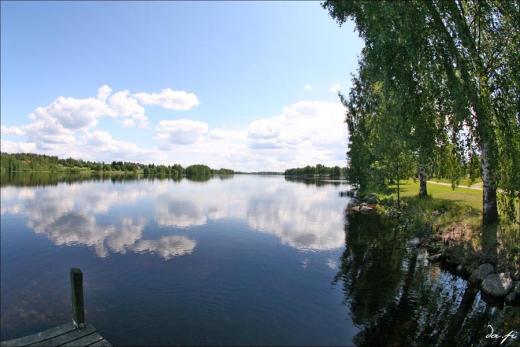 Vuoksa represents a unique combination of the river and system of the lakes which are in territory at once of two countries – Russia and Finland. A river source is the lake Saima in Finland. The length of the river makes 156 km., from them of 143 km. Is in territory of the Russian Federation.

The powerful water stream is used in economic activities of local residents. As a whole on the river 4 hydroelectric power stations – two Finnish and two Russian are erected. The river Vuoksa wide enough, however a channel is narrowed only because of is artificial the created channels. For example, nearby to settlement Baryshevo the width of a channel of Vuoksa reaches 2.5 km that makes it more similar to lake. Near settlement Losevo the river runs into Suhodolsky lake, and before settlement the river Staritsa following from Balahanovsky lake joins the basic channel. In Suhodolsky lake the river Rough which runs into Ladoga lake originates. Behind Balahanovsky lake there is a set of small channels and lakes, and about the Tiversky site of ancient settlement the sleeve of Vuoksa becomes again lake. Near to village Vasilevo the channel is divided on Squirrel to a channel and a channel at village Melnikovo. After both channels run into lake Vuoksa. 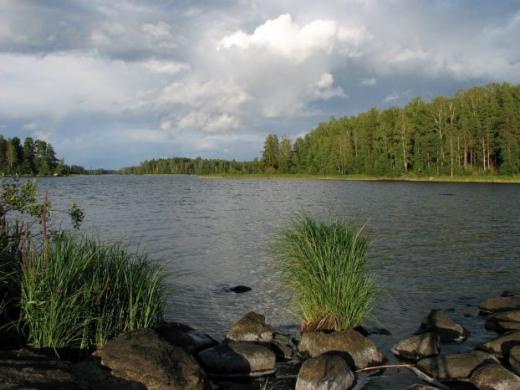 Under the influence of natural factors and intervention of people the channel of Vuoksa repeatedly changed. Till XVI century the river had two channels, one of which ran into Ladoga lake around Priozersk, and another bore the waters to gulf of Finland. Nearby to modern Vyborg there passed the important trading way, and the considerable quantity of the monetary treasures found here suffices testifies that the majority of merchants was trusted by the savings to exclusively crude earth. Constant (though also slow) the raising of Karelian isthmus as a result became the reason of drying of the western channel which has turned in due course to a chain of lakes. Also in the beginning of the last century northern sleeve of the river has dried up. 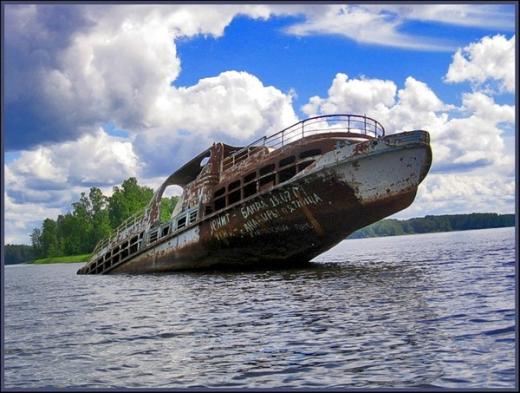 The lake Vuoksa has settled down before a place in which the river Vuoksa runs into Ladoga lake. The lake is mentioned in ancient Novgorod annals, under name Uzerva. The lake bowl has been formed by a receding glacier, and the total area of lake is equal 108 km ?. In lake there is a set of curly rocks and superficial reaches. The role of the basic drain of lake is played by the river with the same name which runs into Ladoga lake. The biggest island of Vuoksa – Losinyi. On him industrial deforestation is spent and various grain crops are grown up. The considerable quantity of various fish which lives in the river and lake, involves here not only local fishermen. The set of travellers comes to take pleasure here in fishing in these beautiful and silent places. In the XX-th century between islands and settlements the water communication by means of several small steam-ships ashore has been adjusted. To the middle of 90th years of the last century flights were carried out by only one river bus which has sat down on a bank and has been sawn on scrap metal in 1997. The modern name has received lake only in the middle of the XX-th century. In lake the set of islands of the most various sizes, and ashore settles down some settlements and tourist bases. All fans of fishing and freakish natural landscapes necessarily should visit here.