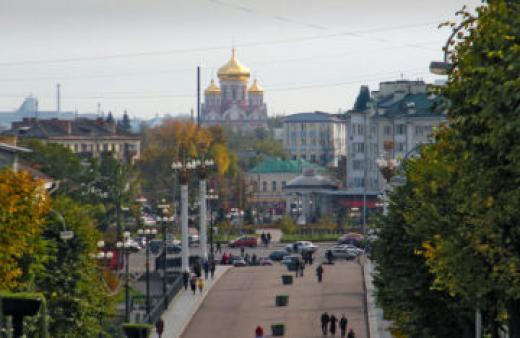 The city of Orel, which arose at the confluence of two rivers – Oka and Orlik – is similar to many other cities in Russia that grew up on the site of ancient fortresses. Now the city is associated with the names of famous figures of literature: Leskov, Turgenev, Bunin, Andreev. Founded in 1556, the city, according to legend, received a name from the bird of the same name. A majestic figure of a feathered man, he meets the guests at the railway station building, spreading his wings wide. About this sculpture and other noteworthy objects – in our selection of the most important places of the city.

Eagle sculpture at the railway station. 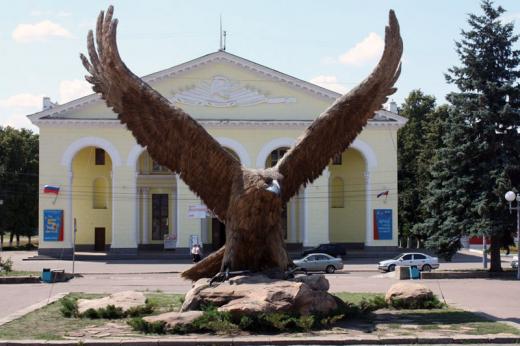 An impressive four-meter bronze figure of an eagle is set in front of the entrance to the railway station. The statue is served by a ball – a symbolic image of the Earth with a detailed reconstruction of the continents. Also, on the pedestal there is an inscription – the 450th anniversary of the city of Orel. This sculptural figure of a bird became a gift for the anniversary of the city from the famous businessman Nikolai Greshilov in 2016. Earlier, on this place towered eagle from the branches, which is now at the entrance to the 909th quarter of the city. According to legend, the city “Orel” received the name of the same-named bird. It was seen by the builders of the city, when they were going to cut down the oak, on the site of the future city.

A Monument To Alexei Petrovich Ermolov 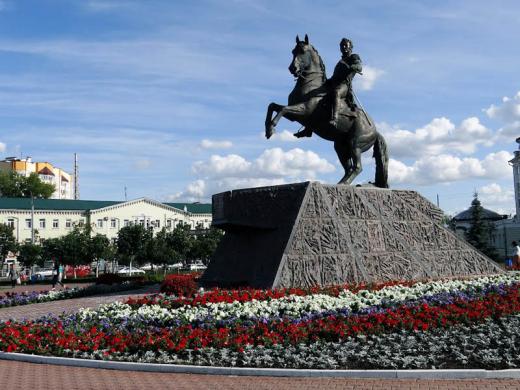 The monument to the hero of Patriotic war of 1812, General Alexei Petrovich Ermolov was opened in the same square in 2012. Funds went from charitable donations. The price of the monument installation is equal to more than ten million rubles. Alexey Petrovich Yermolov come from an impoverished noble family, for life has received a number of awards, was respected in the army and society. A monument depicting the episode of the battle of Borodino, when the famous General in charge of the army attacked the enemy troops. By personal example he showed courage and determination in fighting for the Motherland. The famous sculptor R. Yusupov it was constructed on the model of the bronze horseman in St. Petersburg. The General’s face was created based on the portrait of the English artist D. Dou. 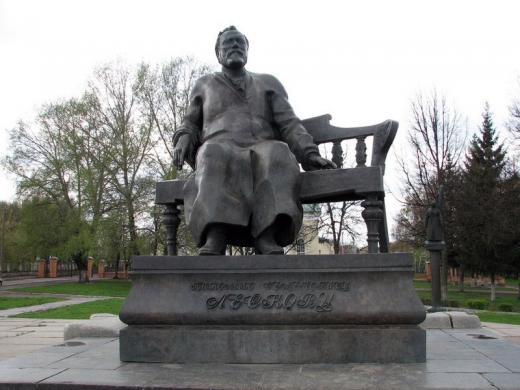 In a small Park, a sculpture by the talented writer N. With. Leskov. His pedestal is surrounded by small sculptures representing heroes manuscripts. Here is Katya Ismailova, a Lefty, Gypsy Grushenka. The authors of the sculptures were Y. G. and Y. Y. Walnut, A. V. Stepanov and V. A. St. Petersburg. N. With. Leskov born in the Oryol province was not just a writer. During his life he traveled a lot and seen many. His observations were embodied in beautiful works that left an invaluable legacy for posterity of the life and culture of the time. 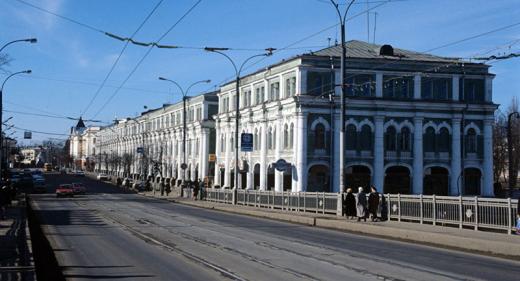 Premises for shops, built in the XIX – early XX centuries, erected on the site of repeatedly burned shops. The first guest yard was built here in the 16th-17th centuries. He consisted simply of huts, in which food was sold. In the XVII century, a wooden hut was built, it included a customs house, a bathhouse, a guest yard, a tavern (Kruzhechny Dvor). After another fire, a stone building with a gallery was erected. It housed a large variety of shops: Glass, Sugar, Iron, Milk. After the last fire, the shopping arcades were rebuilt in the 19th – early 20th centuries by the means of merchants and became the shopping center of the city. Such eminent representatives of the trade as the Kalashnikovs, Rusanovs, Domogatsky, Bukhvostovs and others represented their goods here to buyers in numerous shops. After the destruction of the Great Patriotic War, the trading rows were again restored, the building was completed on the third floor. Now it houses the regional museum of local lore and the central city library. A.S. Pushkin. Other premises are occupied by shops, various institutions and organizations. 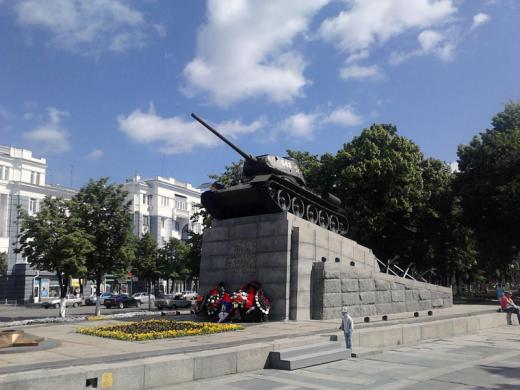 Square tankers – a park dedicated to the heroism of soldiers and the memory of their services. Here there are meetings and meetings of veterans. In ancient times, the square was called the Ilinskaya Square, on this place were located shopping arcades and public executions were carried out. On the first day of May 1920, a public garden was organized here, which was named “Pervomaisky”. Occupied by the enemy, during the Great Patriotic War, the Orel was liberated from the invaders on August 5, 1943. During the battle, many Soviet soldiers were killed. They were buried in the very center of the city, in the park “Pervomaisky”. To honor the memory of the dead put the tank T-70. Subsequently, he was raised on a pedestal, the Eternal Fire was lit nearby, and the square was rebuilt. The monument itself was taken from the depths of the park and replaced by a model on the T-34, which took part in the victorious battles of the armored forces. On the communal grave there is a granite monolith with inscribed names of the dead. Steles were put up with a battle map on the Orel-Kursk Bulge and an order for the Salute of Victory in honor of the liberation of the city of Orel. 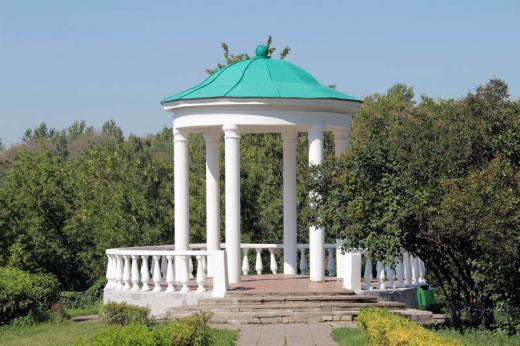 “The noble nest” landscape and literary-historical reserve. Repeatedly mentioned him in their works writers: I. S. Turgenev, I. A. Bunin and N. With. Leskov. Thanks to the initiative of the Oryol society of fine arts in 1903 it was converted into a garden. For skiing on the river, built a pier. Among the green trees held musical evenings, the plays of. 1967 was marked by the program for improvement of gardens, installation of a rotunda and a bust of I. S. Turgenev. Also, the Park is a wooden house of the XIX, which are referred to as “House Kalitenya” of works by J. S. Turgenev’s. In 1987, the Park became a protected zone. In 1993, set stele with an inscription indicating that the square is a monument and taken under protection as a national treasure. 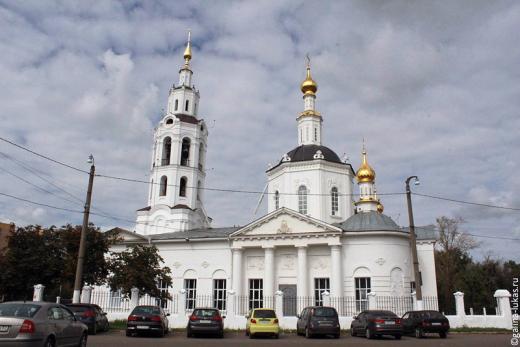 The first building of the Epiphany Cathedral dates from the middle of the 17th century. True, it was wooden. According to the decree of Tsar Mikhail Fedorovich, at that time there was an intensive restoration of the city of Orel after its burning by the Poles and Lithuanians. Due to the fire of 1630, the church and the monastery burned with her. The monastery was moved higher along the Oka River, and the church was built a new one, stone in the style of the Naryshkin Baroque. In the years to come, the future cathedral suffered many different changes:

In the cathedral is kept the icon of “Joy of All Who Sorrow” – the main shrine for the parishioners. The time of the icon’s appearance dates back to the 17th century. One of the versions tells that this and other icons were moved to the temple, on the advice of the townspeople, from the Gostiny Dvor, shortly before there was a fire. During the anti-religious persecution, the icon was kept by the citizens. She was several times tried to kidnap, and kidnapped in 2004. But the collector, who bought the icon from the thief, returned it to the temple.

Temple of the Iberian Icon of the Mother of God 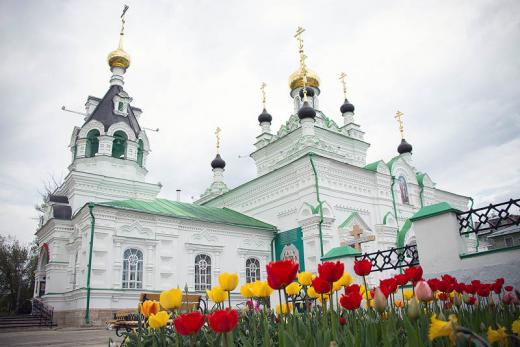 The Temple of the Iberian Icon of the Mother of God was erected in 1902 in honor of the coronation of Nicholas II for railway workers. In Orel it is the youngest, and it is the only one preserved in the Neo-Russian style. They built the church in just three years to collect money from railwaymen, merchants and ordinary citizens. Tsar Nicholas II also contributed – 1000 rubles. The main shrine of the temple was the icon of the Iberian Mother of God – a copy of the Voskresensky gate in Moscow. 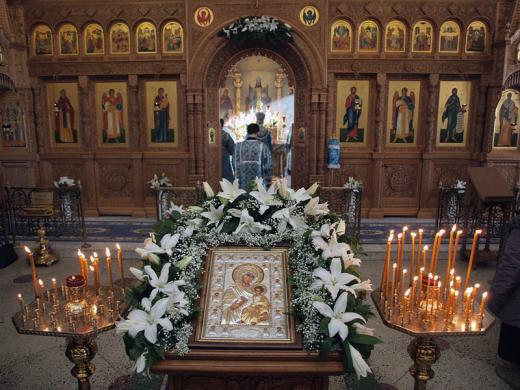 In the 20-ies of XX century the Church was closed. During the war greatly destroyed by bombing. After closing it was used as a railway building for schools, kindergarten, shop. Only in 1990 began an active restoration of the temple. Now in the Church there is a baptistery for adults, rooms for Sunday school classes and libraries. 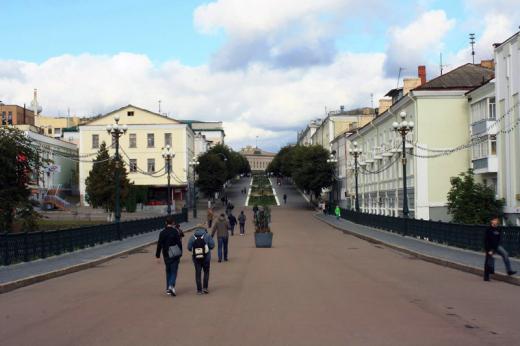 Lenin Street had different names: Bolshaya Dvoryanskaya, Bolshaya Bolkhovskaya and others. Initially, it was laid on the site of the forest. The name of the street is Bolkhovskaya, in the direction of the road, to the town of Bolhov. On the city plan of 1779, the street was marked as the main one. After the Orel became a provincial town, Bolshoy Bolhovskaya Street was actively built up mainly by stone buildings. It became a place of concentration of trade, here were placed provincial institutions. According to the tradition of that time, they built houses in the style of classicism. In 1823, Bolhovskaya Street acquired a stone pavement, the building of the Noble Assembly. In the XIX century it was longer in length than the modern one. Representatives of the city nobility settled along the street, the richest merchants opened their own shops and hotels. On the street there were often fires, because of which several houses burned at once. The main stages of the subsequent transformations of the city: