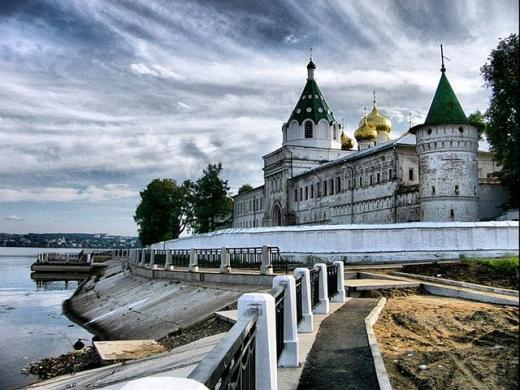 Kostroma is located in 352 km North-East from Moscow, Kostroma lowland, on both banks of the Volga river and the old mouth of the river Kostroma. This is one of the oldest Russian cities. Kostroma was founded in 1152. In the thirties of the XIII century just rebuilt Kostroma was burned by the troops of Batu Khan. In 1246 Kostroma became the capital of the Kostroma Principality. In XIII-XIV centuries around the Kostroma fortified monasteries, protected the approaches to the city: Ipatyevsky and the Nikolo-Babaevskiy. In 1364 Kostroma part of the Moscow Principality, since history is inseparable from the development and culture of the all-Russian state. In the time of Troubles Kostroma was twice taken by the troops of the Polish magnate Lisovsky and suffered terrible devastation. In the XVIII-XX centuries Kostroma – one of the big Russian cities with the developed textile, metal-working industries.

In Kostroma has preserved a large number of historical and architectural ensembles, individual monuments, including monuments of industrial architecture. The most ancient among the preserved historical buildings are ensembles of the Epiphany monastery and the Ipatiev monastery. An outstanding monument of Russian architecture of the XVII century, is the Resurrection Church on Debre (1652).

Kostroma stalls are one of the largest surviving shopping centers in Russia in the late XVIII – early XIX centuries, Trade stalls, located on the main square of the city, consist of more than twenty buildings of various sizes and descent to the river Volga. The complex of buildings of Red, Flour, Gingerbread, Fish, Tobacco, Oil, Dairy series give the center of the city unique and distinctive architectural appearance.

The ensemble of the main administrative area of the city – Susanin, are outstanding monuments of Russian architecture – the Office building, the house Borshchova, building of Guardhouse and fire Tower built in 1800-1820 years. In 1823, near the customs posts on the Bank of Volga river on the site of the main approach to the ensemble of trade rows was built Moskovskaya Zastava for the organization of the front entrance from the side of the main transport artery, the river Volga.

Kostroma miraculously preserved the charm of the old merchant Volga city. Like a hundred or two hundred years ago moored to the Wharf now, modern ships, and not changed the name of the city’s main shopping street Dairy mountain. In the famous Shopping ranks of Kostroma, you can see the colorful signs, for example: “Shopping center – Shoes”! But the main thing – from all the towns of the “Golden ring” only in Kostroma, you can buy a completely unusual products from pure natural linen. Bright, colorful napkins, tablecloths, bed linen look on trays merchants real works of art.