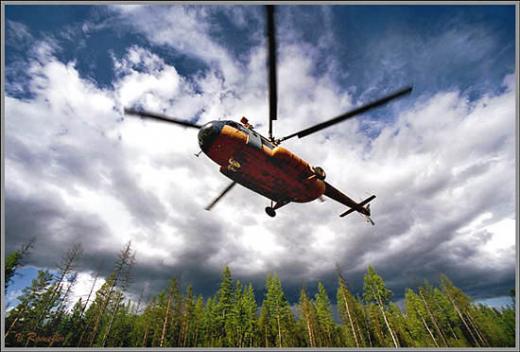 Great contribution to the study of the Tunguska earth at the present stage makes the scientific staff of the State natural reserve “Tunguska”, organized on 9 October 1995.

The reserve is the conservation, research and eco-educational institution. Reserve is situated near the village of Vanavara, in the taiga of the Podkamennaya Tunguska river in the Evenk municipal district of the Krasnoyarsk territory. The address of reserve: 648490, Krasnoyarsk territory, and Evenki municipal area, C. Vanavara, street of Moscow, 8.

The total area of the reserve 296490 hectares of the Territory of the reserve is a typical, practically not subjected to local anthropogenic impacts district North East Siberian taiga with the characteristic of her landscapes and bio areas. However, the territory of the reserve is unique, because it stores prints mysterious “Tunguska event”. The purpose of the establishment of the reserve was to examine the unique natural complexes of Evenkia and consequences of influence of global Cosmo-ecological disaster.

Its territory is unique. It stands out among other reserves and sanctuaries of peace to the fact that the area between the river Hushmu and Kimchu in 1908 at 5-10 km destruction of the space object, known in history under the conditional name “the Tunguska meteorite”. The nature of the Tunguska phenomenon remains a mystery, that is of special interest as the only one on the earth area, a closer study of the environmental impact of space disasters. In the late 20-ies on the initiative and under the direction of L. A. Kulik was built “Zaimka kulika” – complex of structures, the employee up to the present time base for field expedition work, – declared in 1985 historical monument of regional importance. Currently, this complex includes 4 objects on the Western slope of the mountain Stojkovic (Hut Kulik) and buildings on the left Bank of the river Hushma (“Haven”) 7 km to the South of Zaimka kulika. To the 90th anniversary of the fall of the Tunguska meteorite (1998), built a new base at the cordon of “Marina”in a new complex includes: bath, big house and the laboratory work in the field.

This reserve relates to the field of high-continental climate characteristic of her large amplitudes of daily and seasonal temperature of air and soil. In summer the temperature reaches +30 C and higher in the winter-55-58°C. the Snow cover is not deep, there is a strong soil freezing. The Central part of the reserve is the crater of the ancient Mesozoic volcano with multiple side craters as inside the main and outer slopes. Modern terrain is a low plateau, which is made from the surface of loose Quaternary sediments and dissected deeply incised valleys separated, sometimes extra flat Mesopotamia. The terrain is very swampy. Individual outputs of the trap tel rise in the form of a cone volcanoes or table mountains with a relative height of 100-300 m The highest point of the reserve is located on the spurs of the chain of hills called Lakurski ridge – 533 m above sea level. The second you saute peak is mount Farrington is located near the place of the Tunguska catastrophe. Chain of hills in the area, cut through by the hanging valley of the brook Churgim, forming a spectacular waterfall tall 10 M.

On the territory of the reserve is dominated by larch and pine-larch forests. Growing stock of forest associations are: spruce, fir, cedar, pine, larch, aspen, birch. Diverse vegetation cover of the territory of the reserve, there are all series dynamically linked vegetation associations Angarsk biogeographical region. There are a number of specially protected Botanical objects, of them: Calypso onion, beautifully flowering plant that grows in coniferous forests with the green cover. Occurs rarely. Included in the Red book of Russia. Lady’s slipper real and lady’s-ladies ‘ – slipper, flowering plants, included in the Red book of Russia. Rhodiola rosea as a valuable medicinal plant, to be careful protection, also subject to special protection ‘medicinal plants, which on the territory of the reserve there are over 100 species.
The fauna of the reserve “Tunguska” is quite diverse and presents characteristic of the middle taiga of Central Siberia views. On the territory of the district zoologists note dwelling of about 40 species of mammals. Among them stand apart species, which are of great commercial importance is: sable, squirrel, elk, Northern deer. Sable is a symbol of Evenkia. Its density is small, but large area of the district, in principle, provide a significant prey. This reserve is intended to provide this kind of comfortable conditions for reproduction. Moose in the area of nowhere reach the maximum number, but their commercial value is high. Now the number of its population is growing, the reasons: the reduction of aviation press hunting and restoration of burned areas. The area is forest subspecies of reindeer, the number of its population is stable but less than the elk; undertakes seasonal migrations on 100-150 km complete the picture of the species, the number of which is low, it is: lynx, brown bear, Fox, glutton, musk deer, wolf.

From birds to protected areas are characteristic: wood grouse, black grouse, hazel grouse. Through the reserve routes of seasonal bird migration. Here there are species included in the Red book of the USSR and the Red book of the RSFSR, such as white-tailed eagle, peregrine Falcon, osprey, black stork.

In water bodies according to preliminary studies 40 species of fish. Interest are as rare species and valuable commercial fish. This is in particular: sterlet, Siberian sturgeon, taimen, lenok, nelma, Yenisei river ISE. In General, the fauna is incomplete, further study could lead to significant discoveries. Bogs occupy 15-20% of the area of the watershed spaces. The most typical of permafrost peatlands, developing at the base of the slopes of the valleys of rivers and streams, as well as a large flat-hilly centers, which play major depression relief on the slopes of valleys, river terraces and watershed plateau. Widespread peatlands upland, covering evenly extensive storage space.

Of the berries on the territory of the reserve there are: cloudberry, red and black currant, stone berries, blueberries, dominated by the blueberry, lingonberry, cranberry. A large variety of mushroom, among them: white mushroom, grease nipple, aspen mushroom, boletus etc.

Central estate of the reserve is located in the Petrograd Vanavara and is a two-storey comfortable building with a plot of land plot of land and outbuildings.

In the village can be reached mainly through Varnavar airport. The river Podkamennaya Tunguska river is navigable only during the spring flood. Transport highways, except for winter roads, existing seasonally. In summer with the Central estate on the territory of the reserve can be reached by water on the rivers of Podkamennaya Tunguska and Chamba (boat type “Kazanka” , walking by on the “trail Kulik” (ecological trail), length of the route 78 km in the Winter snowmobile type “Buran”, the helicopter MI-8 (flight time-20 min. Communicating through radio communications stations on the type of “Angara”, “Flax”, “Karat”.

On the existing state of Russian zapovedniks tourism in them is denied. In Tungus reserve, due to the unique event of 1908, by way of exception is allowed limited tourist activity with the purpose of ecological education of the population, the acquaintance with beautiful natural objects of the reserve, the fall of the Tunguska meteorite. There are three ecological and educational route. Two of them water, across the picturesque rivers Kimchu and Hushma, third – walking on the “trail Kulik” – the famous route of the discoverer of the wreck of the Tunguska meteorite. In the routes with tourists is a lot of outreach.