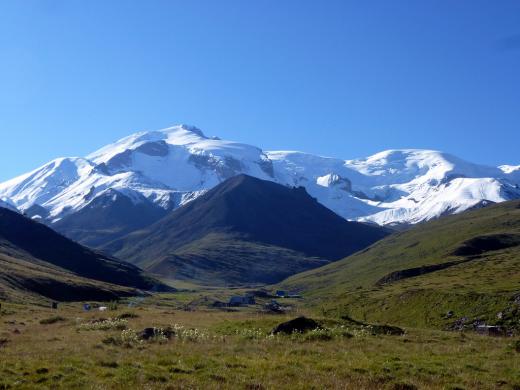 Elbrus is a mountain that really knows how to enchant, and as climbers seeking to conquer the next peak, and the most ordinary travelers who come to its foot every year to feel all the power and strength of the stone peak. And of course, no one is disappointed. This article will tell not only about which mountains Elbrus is in, but also will acquaint readers with its features, the secret name, myths and legends.

Elbrus – the mountain, rightly considered the highest point of the Russian Federation, is located in the northern part of the Greater Caucasus Range, on the border of Karachaevo-Cherkessia and Kabardino-Balkaria. Due to the fact that there is still no exact boundary between Europe and Asia, the mountain is sometimes equated with the highest European mountain peak and referred to as the “Seven Peaks”. Perhaps, some time will pass and geographers will finally resolve this dispute, but for the time being it is for certain known that Elbrus is a mountain, which is a so-called two-summit stratovolcano. Its cone-shaped peaks were formed on an ancient volcanic base, and from the geological point of view, both peaks are absolutely independent volcanoes, each of which has a classical form and a distinct crater. 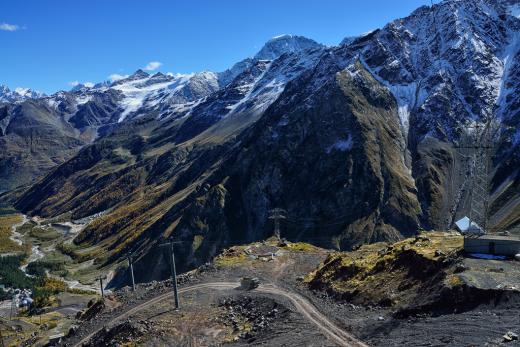 Caucasus mountains, Elbrus…… These places are actually famous for its ancient history. Few people know that age is determined by the condition of the upper part, which, for example, at the highest peak of Russia is destroyed by a vertical fault. It was possible to establish the date of the last eruption: it happened around the 50s ad.

Section 2. The secret of the name of the peak

Perhaps, to the question of where Mount Elbrus is, let it be a little thoughtful, but the usual average student will also answer, but little is known about the etymology of the name. In general, it should be noted that this vertex has several names at once. In total, there are more than a dozen. To date, it is difficult to determine which of the names appeared earlier, and which later. The modern name of this mountain, according to one version, comes from the Iranian “Aytibares”, which means “high mountain” or “brilliant” (Zend language variant) in Russian. On Karachay-Balkar peak called “Mingi-tau”, which is translated into Russian as “mountain of thousands”. Nevertheless, there are Balkars who call it a little differently – “Minge-tau”, which means “mountain saddled”. Modern representatives of this nation still say “Elbrus-tau” – “a mountain around which the wind is spinning”. 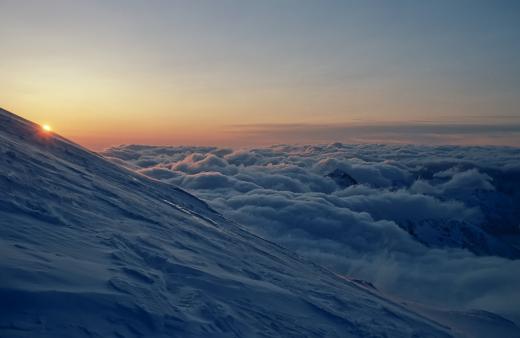 Section 3. What is the height of mount Elbrus?

Perhaps, at least once in my life this question interested many curious people. But the answer to it is not as simple as it might seem at first glance. Why? It’s all about the specifics of its structure. As already mentioned above, Elbrus is a mountain consisting of two cone-shaped peaks. The height of the western is 5642 meters, and the eastern one – 5,621 meters. The saddle separating them rises above the surface by 5300 meters, and the distance from each other is about 3000 meters.
For the first time the size of Elbrus was determined by the Russian academician VK Vishnevsky in 1813. Recall that today the highest mountain in the world is Mount Everest (Jomolungma), whose height is 8848 meters, compared to which our mountain peak looks tiny. 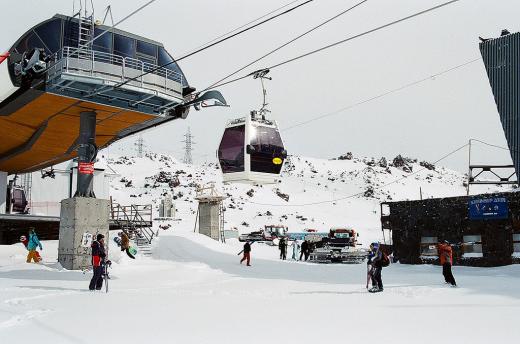 Ascent to its summit often dreams of experienced climbers, as well as beginners. However, this can not be done at any time. The most favorable is the summer period, July-August. At this time, the weather is the most stable and safer to visit such heights. The air temperature in summer rarely drops below -9 ° C, although it may well drop to -30 ° C during the ascent. From October to April there is a severe and cold winter in these places. In the cold season, visiting the peak is almost impossible, and climbing it is equivalent to suicide.

Elbrus is amazing and unique. The description of the mountain takes too much time, because every time more and more interesting features are revealed. In this article, we will cover only the most obscure. Geological studies of this extinct volcano showed the presence of layers containing volcanic ash, which was formed as a result of ancient eruptions. According to the first layer, scientists have proved that the very first eruption of Elbrus occurred about 45 thousand years ago. The second layer was formed after the eruption of Kazbek volcano. It happened about 40 thousand years ago.

Now it is known for certain that it was after this second, the most powerful, even by modern standards, eruptions, the Neanderthals, who settled in the local caves, left these lands and went in search of more favorable conditions for life. The most recent eruption of the Elbrus volcano occurred about 2000 years ago. 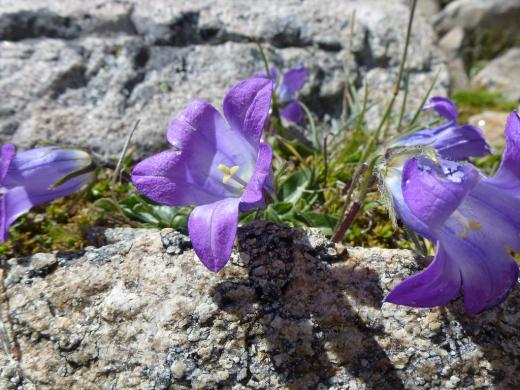 In general, the Caucasus Mountains, Elbrus in particular, are enveloped in many of the most amazing and mysterious legends and myths. One of these tales tells that in times immemorial there lived a father and a son – Kazbek and Elbrus. They both fell in love with one beautiful girl named Mashuk. Only the girl could not make a choice between two glorious heroes. For a long time father and son competed, not wishing to yield to each other, and a deadly duel ensued between them. They fought until Elbrus defeated his father. But, realizing his terrible act, his son turned gray with grief. He no longer wanted love, obtained at the cost of the life of a loved one, and Elbrus turned away from the beautiful Mashuk, a little later, by hitting himself with the same dagger that killed his father.

Beautiful Mashuk long and bitterly wept over the knights and said that on the whole earth there were no such heroes, and that it is hard for her to live in the world without seeing them. Hearing the god of her groaning, and turned Kazbek and Elbrus into high mountains, more beautiful and above which there is no more in the Caucasus. Beauty Mashuk he turned into a smaller mountain. And now from time immemorial, from day to day, there is a stone girl and looks at the mighty peaks, and without deciding which of the two heroes is closer and dearer to her heart of stone.

Section 7. The history of great conquest

In 1829, led by the head of the scientific expedition, George Emmanuel, the first ascent of Elbrus was made. The members of this expedition were mainly representatives of the scientific circle: physicists, botanists, zoologists, geologists, etc. They conquered the eastern part of Elbrus and entered history as pioneers of one of the greatest peaks of our planet Earth. The first to climb was Elbrus Kilar Khachirov – a conductor. A few years later, the higher peak of this mountain was conquered – the western one. The expedition, organized by English climbers, led by Florence Grove, made a march on the western part of Elbrus in 1874. The very first person who climbed on top of it, too, was the conductor, this is Balkar, Ahii Sottaev – participant of the first expedition. Later, a man appeared who managed to conquer both peaks of Elbrus. It was the Russian topographer AV Pastukhov. He in 1890 was able to climb to the western peak, and in 1896 – to the east. The same person made detailed maps of Elbrus. 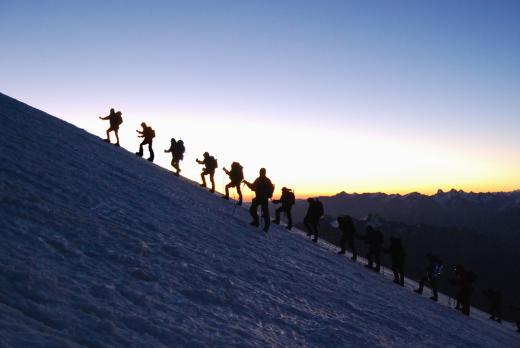 It should be noted that until now, stratovolcano is the most popular mountain among climbers from all over the world. To make an ascent to its peak, climbers spend an average of about one week. But in our time you can use the cable car, which greatly facilitates the journey and saves time. At an altitude of about 3,750 m there is a shelter of the “Barrels”, from which the ascent to Elbrus now usually begins. In this shelter there are six-sealed insulated barrel-shaped trailers and a specially equipped kitchen. At the level of 4100 meters is the world’s highest mountain hotel – “Shelter of eleven.”

Elbrus is a mountain that can captivate travelers with its natural features, for example, unique rock formations called Stone fungi. Until now, no one knows why these stones were nicknamed mushrooms by the people, and nowhere in the Caucasus such sculptures are no longer observed. On a small level area (250 x 100 m), a couple of dozens of such “mushrooms” are picturesquely scattered. In many of them you can see the indentations. Perhaps our ancestors used them for some cult purposes. Especially impressive are stones that resemble a face looking up. Many believe that this is a place with very strong positive energy, and even the weather here is very anomalous.

Section 9. The Museum of Defense of the Elbrus Region

The Museum of Defense is the most high-altitude museum in the whole world. It is located at an altitude of 3,500 meters above sea level. The uniqueness of the exposition lies also in the fact that it is not confined to the building alone, but continues in the surrounding area. This institution has been operating since January 1, 1972. His development and preservation of collections are always monitored by a scientific worker and two employees. The collection contains more than 270 items. It should be noted that during the Second World War, the highest mountain front was located in the Elbrus region. In these places fierce battles were fought for mountain passes, which the nazis tried to capture in order to reach Transcaucasia. Photo-materials of these events have been stored in this museum for many years. The Museum of Defense of the Elbrus region is an organization of regional subordination, in which cultural and mass work is conducted. 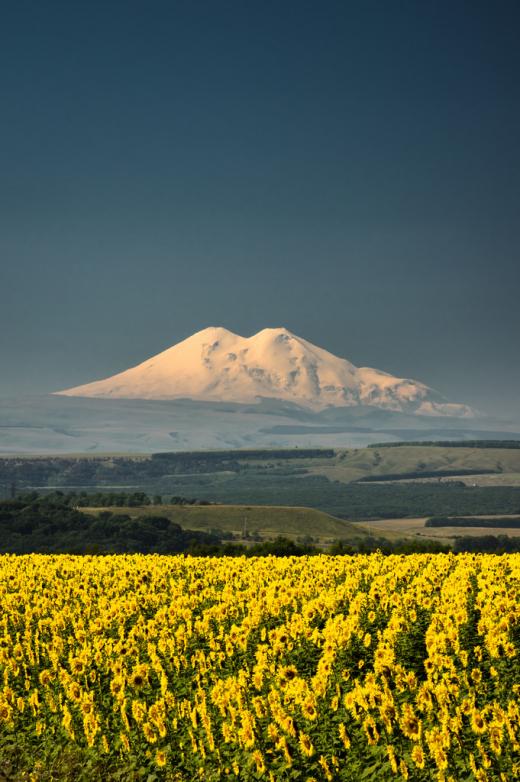 Section 10. Interesting facts about the mountain