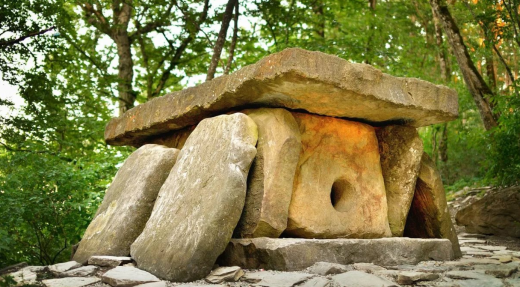 The attention of today’s publication is to the megalithic tract, discovered in 1904 by the well-known Russian archaeologist Yevgeny Dmitrievich Felitsin, and named by him “Kozhozhsky dolmen group”.
Such a place with the name Kozhzhokh you will not find on any map of the Maikop district of the Republic of Adygea. This is not surprising, so, unwittingly, in Russian, the Adygeyan name of the settlement “Hadzhokh” Yevgeny Dmitrievich was distorted.
At the turn of the 19th and 20th centuries during the excavation, Felitsyn counted 120 dolmens (he excavated 34, the rest remained in embankments).
All of them were located on the right terrace of the right bank of the Belaya River, between the tributaries Maly and Middle Hajokh, in the present northern outskirts of the village of Kamennomostsky.
According to some modern scholars, the Kojozhou group numbered up to 300 monuments. 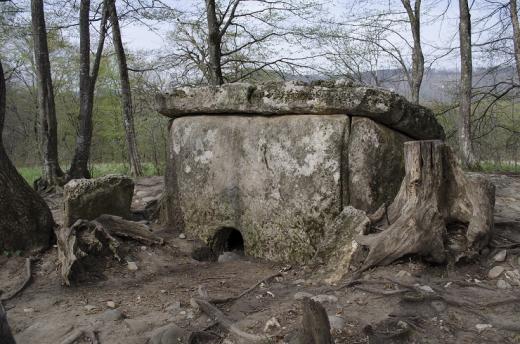 Interestingly, five dolmens without holes were found in this group at the time.
Megaliths of this group date back to the 4th-3rd millennia BC. in the study it was found sufficiently powerful cultural layer consisting of clay vessels, fragments molded pots and flat-bottomed bowls, bronze arrowheads and pins, flint flakes and animal bones.
This dolmen mega-group is the most accessible for visiting.
We get to it, following the transport from Maikop on the route Maikop-Kamennomostsky. Once you have passed the district center of the Maikop district – the village of Tula, you find yourself in a wide valley of the Belaya River, bordered on the left and right by water dividing ridges. Here, at the turn to the village of Abadzekh, the ancient possessions of megaliths begin. Moving forward to the mountains, we leave on the left side of the famous “herculean clearing” with its four hundred dolmens, as well as a unique natural boundary “GOLD” with strange dolmen tombs complex design.

We enter the village of Kamennomostsky.
On the right side, near the sign with the name of the settlement, we are greeted by the hospitable restaurant and hotel complex Belovodie.
On its territory enthusiastic host various curios collected from nearby neighborhoods, including a collection of dolmens sleeves hewn boards with grooves and even assembled a small dolmen integral part of several destroyed counterparts. 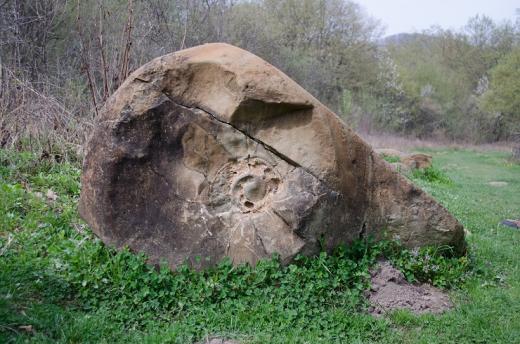 On the right (in the course of traffic from Maikop) there are only three dolmens, but this is the most “liquid” monuments.
A landmark from the road is the sign “Dolmen” and the building of the Museum of the Stone. This small nature conservation corner is based solely on the enthusiasm of Igor Petrovich Ogai, a wonderful person, defender and researcher of dolmen culture in Adygea (incidentally, he is also the director of the local branch of the Russian Geographical Society). It was the forces of Igor Petrovich and his wife in the museum that collected unique fragments of architecture, paleontology and zoology (and are in fact protected from embezzlement), cultivated paths along the edges of which unique natural phenomena – spherical fossils (concretions) with prehistoric shells of ammonites inside were arranged.

And, of course, the crown of this archeological reserve is a perfectly preserved dolmen under the Hajokh-1 marking. 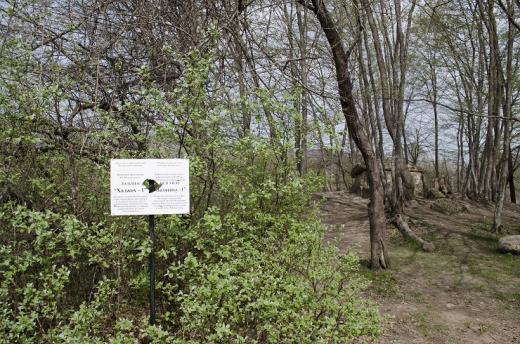 I must say that this dolmen is one of the two title dolmens of Adygea (on a par with the Gueripel megalith).
Dolmen rests on the top of a small hill surrounded by slender oaks with knotty roots protruding from the earth (by the way, you can see a miracle of nature – a tree with 14 trunks coming from the same root). 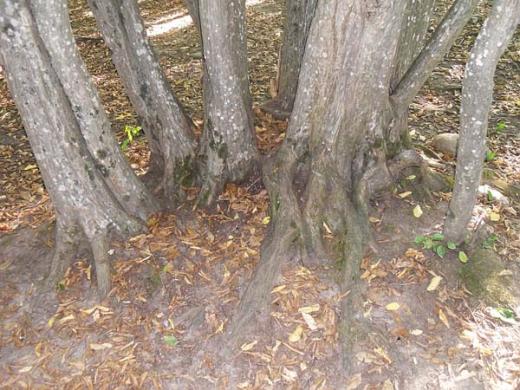 With the passage of time under his own weight, he sank into the ground and now the entrance hole looks shifted to the base of the structure.
The visible part of the front plate has the following parameters: height – 1.7 meters, width – 2.8 meters.
Hajoch-1 is a typical tiled portal type dolmen, built of light gray sandstone and oriented to the southeast.
Despite the apparent safety, it bears the traces of weathering, the destructive impact of the “black” diggers and the inexorable impact of time: the portal slabs were only partially preserved.
Through the gap in the back plate can be traced earth floor. 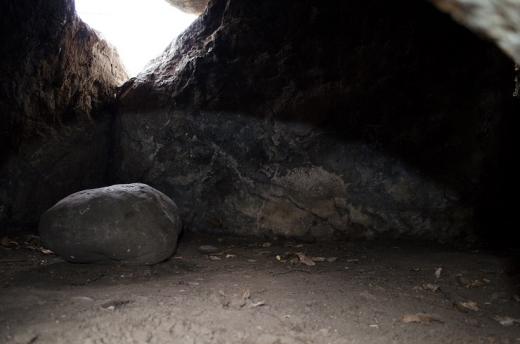 Through the efforts of black archaeologists and the forces of nature, megaliths were practically a mishmash of plain, buried in the ground, moss-covered slabs.
But in 2013, unexpectedly for all scientists and statesmen drew attention to the unfortunate dolmen Hajokh-3. The Government of the Republic of Adygea allocated funds for research and conservation of the dolmen, and the Department for the Protection and Use of Cultural Heritage Objects invited an archaeological expedition from St. Petersburg headed by Viktor Trifonov, senior researcher of the Department of Archeology of Central Asia and the Caucasus, the famous and authoritative researcher and scientist in the field of megalithic culture.
In the difficult autumn conditions of constant downpours began laborious work on the reconstruction of the monument.
The enthusiasts did a truly heroic work – in the pouring rain, the tiles were dug up and put up in tandem with manual blocks, cleaned and installed at their original places, and, moreover, the entire surrounding complex of the building was reconstructed, on an area of ​​260 square meters! 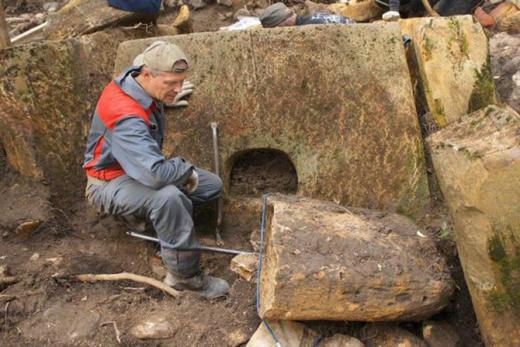 Hajokh-3 is a classic tiled dolmen, its walls are kept in good condition, the cover plate was observed in the form of debris, the bushing was missing (probably blown away).
During the excavations, archaeologists have reconstructed the preserved funerary chamber, portal and dolmen’s yard.
The culture layer in the form of clay vessels, fragments of molded pots and flat bottom bowls, bronze arrowheads, as well as a bronze pin, flint flakes, animal bones, was surprisingly preserved in the chamber.
Well, and most importantly – were found the remains of the burial of twelve people!
The importance of the work done can not be overestimated.
Now we see a unique opportunity to contemplate this remarkable monument in all its almost original beauty: a small dolmen of pleasant yellow-orange color stands proudly on top of a small burial mound paved with a large cobblestone, from the foot of which a short court (dromos) leads to the portal plate, fenced corridor. The chamber opening is of a rare arcuate shape. The dolmen are deepened and fixed in a circle by a core-river stone, and the courtyard is sprinkled with small pebbles. 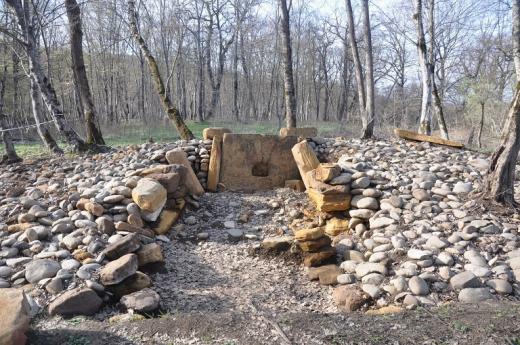 In general, Hajokh-3 poses more questions than answers with its whole appearance: why are there more and smaller objects in one dolmen group? Why are some structures built of gray sandstone, and others of red limestone? Why do some facades have round holes, while others have stove holes? In addition, next to the dolmen quietly lies a plate with well-marked grooved slots. But this is a stove from some other dolmen! What kind? – there are no answers …