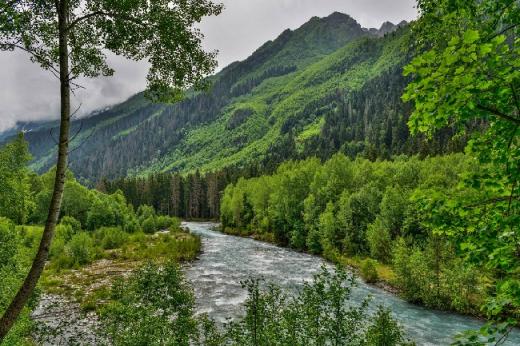 Caucasian state nature biosphere reserve is located on the southern and Northern slopes of the Western Caucasus. This protected area was declared on may 12, 1924, but the experience of preserving the unique nature of these places has its roots to the Grand “Kuban hunting”, organized in 1888. 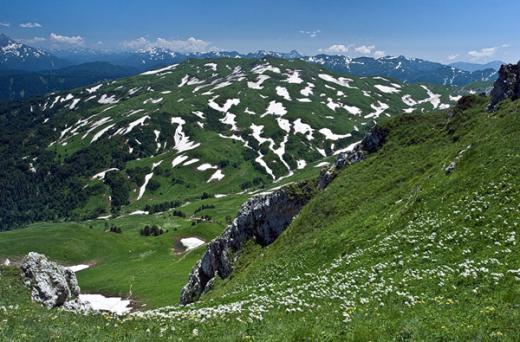 Caucasian biosphere reserve is the second largest in Europe, it occupies the land of the Republic of Adygea, Krasnodar Krai and Karachay-Cherkessia, adjacent to the border of the Republic of Abkhazia. Apart from the main area of the state Caucasus reserve in the Khosta district of the resort city of Sochi Khosta is located in the subtropical division of the reserve, yew and box grove, known throughout the world. The area of the Caucasian biosphere reserve is 280-320 ha. The reserve is surrounded by the buffer zone, natural monuments and wildlife refuges, to the southern boundary of the reserve adjoins the national Park of Sochi. 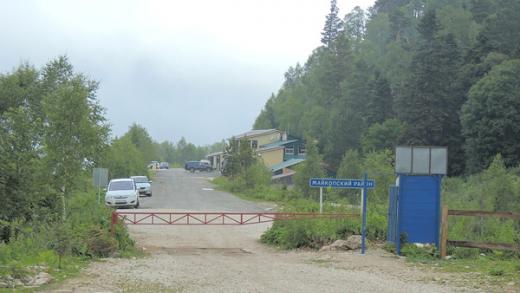 The story of the creation of the Caucasian reserve.

As mentioned above, the Caucasian biosphere reserve was founded on may 12, 1924, but by 1886, the time of the establishment of this territory protected status, i.e., to the time when there was “Kuban hunting.”

In 1906, in accordance with the resolution of Rada of the Kuban troops rented for princely hunting area was divided between the 135 villages, and the lease term was extended to 1909. Academy of Sciences, realizing that after the elimination of the reserve will begin the mass extermination of animals, raised the question of the establishment of the state of the Caucasian reserve. The issue was resolved positively, and the Academy of Sciences we developed “regulations on reserve” and about his planned border. Kuban Rada in return, the allotment was proposed state land. But the Cossack elite was not pleased with this decision, and the establishment of the reserve was frozen.

Re-issue of the biosphere reserve had been raised in 1913, the Environmental Commission, PRO. The project proposed Environmental Commission of the Russian geographical society, offered to withdraw under natural reserve lands “Royal hunt”, belonging to the Kuban Rada. But this time the reserve was not created, as the Council of Ministers did not see this “useful measures”.

In 1916 was made the third attempt to organize a reserve. However, this attempt was not successful.

After the revolution, in 1919, was planned the creation of nine national parks, which included the Caucasian natural.

The civil war caused huge damage to wildlife populations of the Western Caucasus, which could not fail to alarm scientists. Great contribution to organization of the Caucasian biosphere reserve has made a former Forester of the Kuban hunt – Christopher G. Shaposhnikov. Realizing that the official decision on the reserve will be made soon, Shaposhnikov in 1917 requested the forest Department of the Kuban regional government to provide him rent the hunting grounds of the princely hunting. With Shaposhnikov asked for the rent several times more than they paid great princes, but the Ranger didn’t give up.

Shaposhnikov found a means to the end of 1920, the forest Department developed the terms of the contract.

After the establishment of Soviet power, Christopher Shaposhnikov appealed to the authorized Revolutionary Military Council of the Caucasian Front, Steinhaus, and found in his person a supporter of his plans. Soon, Christopher Shaposhnikov received a mandate with the task of organizing the reserve. In December 1920, the Kuban-Black Sea Revolutionary Committee adopted a resolution establishing the “Kuban Highland Reserve” in the Caucasus, within the boundaries set by the Academy of Sciences before the revolution. But due to inter-departmental inconsistencies, the project of the Kuban Reserve was rejected. Only in November 1923 the question of the boundaries of the state Caucasian Reserve, which officially obeyed the organs of the People’s Commissariat of Education of the RSFSR, was decided. And in May 1924 a decree was signed on the creation of the Caucasian bison reserve. Shaposhnikov opposed this name, believing that the mention in the title “bison” would lead to the destruction of the bison population by poachers and bandits, which the reserve was not profitable.

In the first years after the formation of any debate about the boundaries of the biosphere reserve. By the end of 1925, a Commission was established the CPC of the RSFSR under the leadership of N. And. Podvoisky. In July 1927, the Commission on the results of their work presented a report to the CPC, the CPC, in turn, adopted a resolution which confirmed the boundaries established may decree in 1924. But despite these decisions, in the future, the boundaries of the preserve have been subjected to changes. In 1930, the nature reserve was annexed to the territory of the Khosta yew-box grove. In 1936 Alpine massif, Lago-Naki were transferred to the Azov-black sea Krai, and Baseski plot “gave” Karachay-Cherkess region. In 1951, a significant portion of mountain meadows was reserved for grazing, and virgin forests began to be cut down. 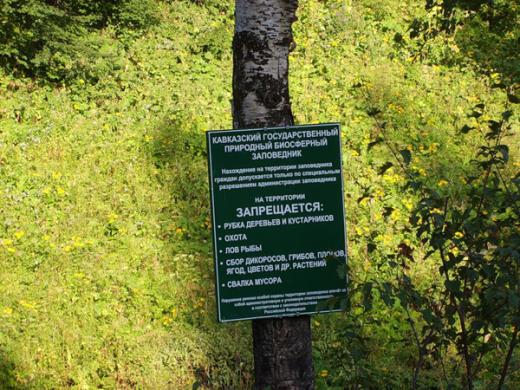 Fauna of the Caucasian state nature biosphere reserve has more than 3000 kinds, half of which are vascular plants. The forest flora is represented by more than 900 species, some of which can be found in mountain-meadow zone. There are 165 species of trees and shrubs in the reserve, of which evergreens are 16, 7 conifers and 142 species of deciduous trees. 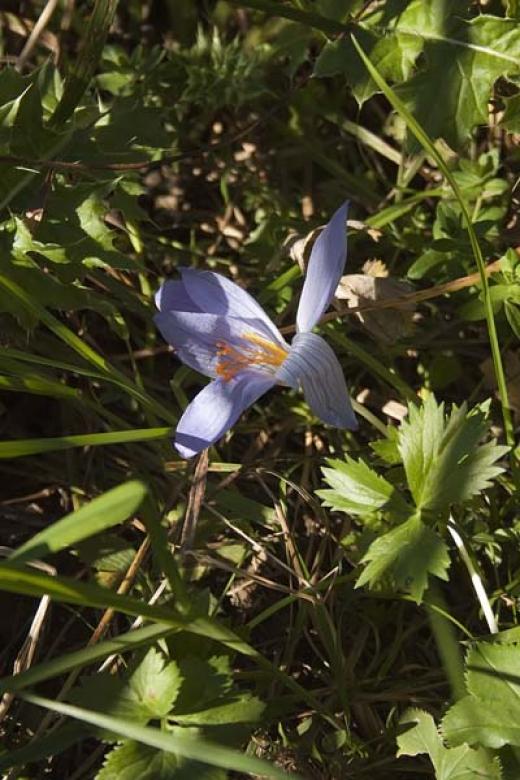 Unique flora of the reserve are ancient types and members that have a limited distribution not only in the Caucasus but also in the world. Every fifth plant of the Caucasian biosphere reserve is a relic (that is to say, a living witness of past geological eras) or endemic (i.e. restricted distribution).

In the state reserve is home to over 30 species of orchids, 40 species of ferns, there is also sineserye and evergreen plants, many decorative plants.

Throughout the territory of the Caucasian nature biosphere reserve there are small groups (or single trees) yew. Yew – evergreen, conifers can live up to 2 or even 2.5 thousand years of the patriarchs can be found in the Khosta yew-box grove. Here in the most picturesque Department of the reserve is found the Holly Colchis and Fig Carian, boxwood Colchis and Colchis leptopus, as well as many other ancient flora.

The exact quantity grown in the state Caucasian biosphere reserve of fungi is not established, but experts believe they may be about 2000 species. 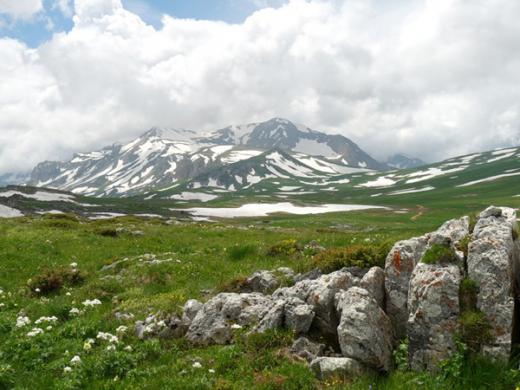 Caucasian state nature biosphere reserve is the only store many of which have become rare in other parts of the world species of plants and animals. From growing on the reserve, plants, 55 species listed in the Red book of Russia. In the red books of different levels listed rare plants, not included in official lists of threatened.

Several dozen species of plants growing in the countries of the Mediterranean and black sea basins, on the territory of Russia are found only in the national Park of Sochi and the southern slope of the Caucasus state biosphere reserve. These include: isascii snowdrop, peony Wittmann, krucheniki spiral, split Larkspur, orchids, Provencal and others.

The fauna of the Caucasian biosphere reserve.

On the territory of the Caucasian nature biosphere reserve is home to mammals, birds (248 species), reptiles and amphibians, fish, mollusks, insects, worms, arachnids and crustaceans of various types. 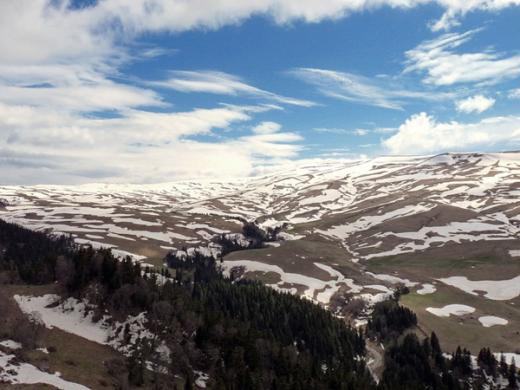 The most vulnerable are the large mammals such as bison, brown bear, red deer, chamois and ROE deer, Western Caucasian Tur and wild boar.

Many of the animals natural biosphere reserve, endemic species or relicts. Any predominate among fish, reptiles, invertebrates, amphibians and reptiles.

In areas of the sanctuary has become a shelter for endangered species listed in the Red book of the Russian Federation, the IUCN Red list and regional Red books. 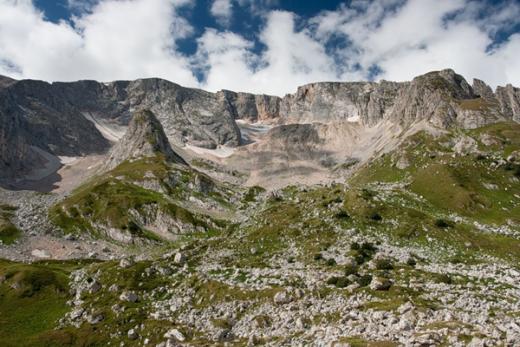 The fauna of the Caucasian biosphere reserve is heterogeneous in its origin. Here you can meet representatives of Colchis and the Mediterranean, Caucasian and European faunas.

The tour in the state Caucasus reserve.

As excursions are available for tourists: the area zoo, Khosta yew-box grove, Lagonaki plateau, pass devil’s gate, the Museum of nature in Guzeripl and the dolmen, the number of eco-tourist routes. 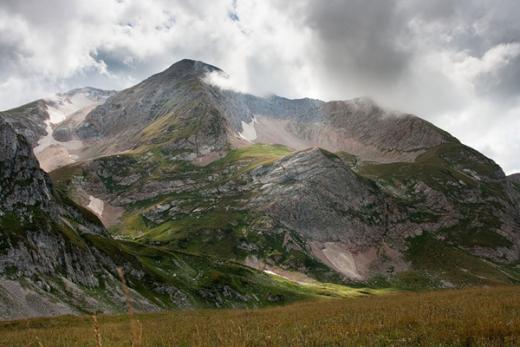 Captive complex for wild animals, you can learn a lot about the fauna of the Caucasian state reserve, mountain scenery, touch the heart and soul to the wildlife area. 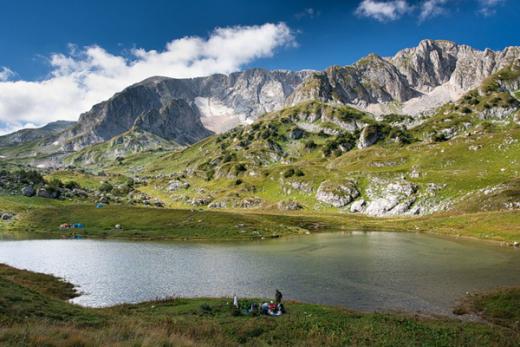 No less interesting are excursions to the “Devil’s Gate” or to the cordon of the reserve in the village of Guzeripl, where the largest megalithic structure in the territory of Adygea is located – the dolmen. Thus, in addition to the enormous importance for the conservation of the ecosystem, the Caucasian State Nature Biosphere Reserve has great potential for recreation and tourism.