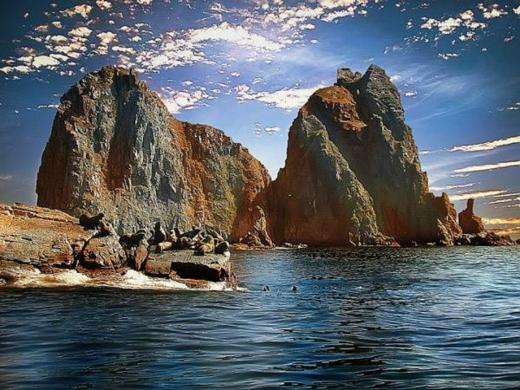 The secluded ice-free lagoon of the Avacha Bay near the southeastern edge of Kamchatka is capable of taking any sea-going vessel even in the wildness of the severe northern winter.

The violent disposition of the Pacific Ocean rarely reaches the coast, where the residential quarters of Petropavlovsk-Kamchatsky and Vilyuchinsk stretch.

The area of the water surface of the bay, discovered in 1729 by the great seafarer V. Bering, is almost 215 square kilometers, and the length is 24 km. Wide three kilometer “gates” and a system of lighthouses allow you to approach the shore of large ocean liners, powerful dry cargo ships and equipped fishing trawlers. For many years the main base of the Pacific Fleet of Russia has been located in Avachinskaya Bay. 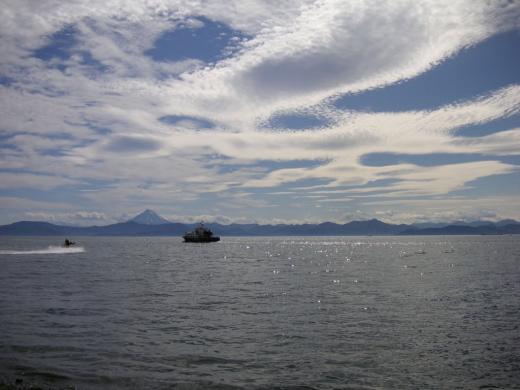 Fishing, diving, sea and forest walks – the main types of recreation on the coast of Avacha Bay.

The Paratunka and Avacha rivers flowing into the bay are rich in varieties of salmon – char, black salmon, salmon, chinook, as well as chum salmon, Kamchatka trout and kunja. Especially popular is ice fishing in winter, when marine species – smelt, navaga, flounder – enter the spawning grounds.

From July to September, amateurs of rafting gather to the banks of Avacha Bay, who finished rafting on Avacha and its tributaries.

The favorite places for immersing the divers are the depths near the island of Starichkov, Zhirovoy and Vilyuchinskaya bays. The underwater world of the Avachinsky lagoon is extremely picturesque: over 30 species of fish are constantly inhabited in its vicinity, curious seals often appear at the entrance to the bay, allowing divers to approach very close, several rare species of sea urchins live among the lush thickets of sea anemones and hydroids. There are also large mammals such as sea lions, sea lions, and larva. In the depth range of 5-12 m several wrecks of interest to re-diving.

To the coast descend along the slopes of hills and mountain ridges, occupying hollows, white-birch groves, cedar forest with interspersed alder trees and mountain ash, glades and fringes are sheltered with mixed grass. The Avacha Bay has excellent opportunities for ornithological tourism and the collection of wild herbs.

Sea voyage by boat with access to the ocean is organized by the travel agencies of Petropavlovsk-Kamchatsky. During the walk, tourists watch the fur seals, bird bazaars on the islands, sea otters and seals that have chosen reefs, and also dive under water or fish in the open sea. Fans of photo-hunting are awaited by irresistible landscapes with views to Avachinsky, Koryaksky and Vilyuchinsky volcanoes, as well as a delightful panorama of Avacha Bay, one of the largest in the world. 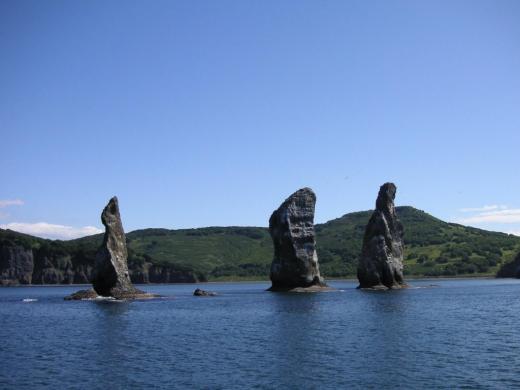 Rocks Three brothers – a symbol of the Avachinskaya Bay. Like three rocky guards block the entrance to the bay, protecting it from penetrating violent storms. An ancient Kamchatka legend tells of young Koryaks who bravely closed their native shore from a flood of tsunami, and even petrified, but did not allow the elements to damage the fishing villages on the coast.

Column-shaped kekury stones sticking out of the water were declared a natural monument in the 80s of the last century.

The Starichkov Island – is a small rocky patch of land, full-fledged occupied by huge bird populations: only the axes here have up to 32 thousand individuals and about 13 thousand old people – birds that gave the name to the island, of which 2 species are “Red Book”. There are rare varieties of spectacle scurf and red-faced cormorant. In the surrounding depths, dolphins and killer whales are observed, on the stony ledges, island seals and seals are warming their backs.

The banks are dotted with meadow motley grass with the predominance of the Arctic arctic, the soft and endemic limb Starichkov – the large moshanka.

dew-claw – – the lonely rock-kekur, which rose lonely above the water, always aroused fear and reverence among the sea travelers. It has long been believed that such stones on the surface of the earth or water are the arrows of the Slavic god Perun, in anger throwing them into the disobedient Veles. However, scuba divers and lovers of fishing quite often visit the island, using it for recreation.

Grandmother’s Stone – Another stone-kekur, a huge boulder with a cut flat surface piled in the throat of Avacha Bay. The island serves as a nesting site for seabirds. Around him, under the water, there are many unusual grottos, which divers like to visit. The underwater world near the Grandmother’s stone is picturesque – plantations of sea cucumbers inhabit sponges, sea urchins and stars, numerous species of fish. 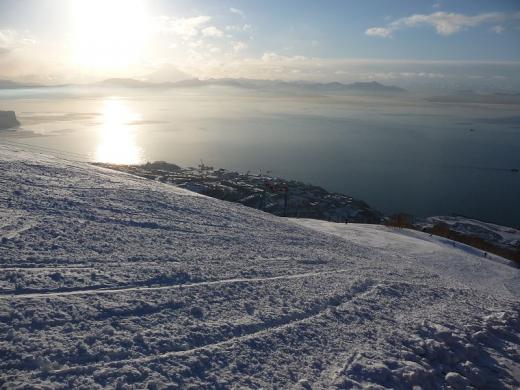 How to get to Avacha Bay.

Undoubtedly, the only and the most optimal option to get to Petropavlovsk-Kamchatsky, remote from the capital of Russia for a distance of more than 8 thousand kilometers is an air flight that takes about 9 hours, which will cost from 11,400 rubles. The city has a constant air service with other Russian airports in St. Petersburg, Novosibirsk, Yekaterinburg, Khabarovsk, Krasnodar and Vladivostok. The airport “Elizovo” is located 30 km from Petropavlovsk-Kamchatsky, and you can get to the center after landing on Kamchatka land by city bus №102 and №104, the ticket price is 45 rubles.

There are no railroads on the Kamchatka Peninsula. The nearest railway station is in Vladivostok.